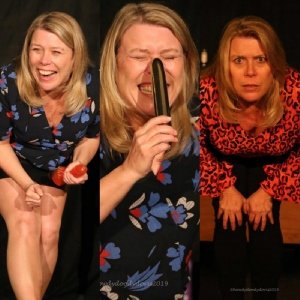 There are people out there who find love at a young age, and it’s so deep and meaningful that it lasts for a lifetime – with a series of milestone wedding anniversaries to look back on in old age. For others, though, their relationships run their course well before the Grim Reaper comes along, for various reasons. Julie (Debbie Bird) is, well, available, but having been married for many years, her grown up daughter Katie introduces her to Tinder, and she gets stuck into the whole ‘swipe left’ and ‘swipe right’ thing. The attention to detail in the script is impressive, balanced between providing a fully credible narrative and not being bogged down in minutiae.

Not exactly a family show, Julie hasn’t been getting much bedroom activity (one of the reasons for her breakup) so there are miscellaneous products for demonstration, just about enough to fill an hour of sexual aids on one of those shopping channels on satellite TV. I say ‘demonstration’: fortunately or unfortunately that word is never preceded by ‘pants down’. That said, at one point, your reviewer fleetingly thought of 50 Shades of Grey. This may or may not be a good place in which to add that there is a smattering of audience interaction (not, I hasten to add, the same as audience participation).

I’m not sure who the target audience is for a show of this nature – the story may be more relatable to women of a similar age profile, but there are good things to take away from the show for almost everyone who attends. It is, for the most part, comical, as the audience is walked through Julie’s experiences, but there are other moments when past events are recounted that were unpleasant to say the least. Laughter is never far away, however, and Julie recomposes herself once more to resume her onwards-and-upwards outlook on life.

Interest is easily maintained from start to finish. This has, at least in part, to do with Bird’s storytelling skills. The story itself is far removed from the ‘all men are terrible’ philosophy espoused by certain other shows in which a female character finds, as Cher once put it in one of her many songs, ‘life after love’. There’s even a good word put in about men of pensionable age. As for the production, having previously completed a run at the 2019 Edinburgh Fringe, even the ‘extended version’ is relatively brief – but it doesn’t feel rushed in any way.

Julie’s encounters with various men are recounted with differing degrees of detail, and include a chorister at the local parish church and a younger man who lives in an adjacent property. Some nifty costume changes help put each scene in context. The show’s final conclusions are not, in themselves, all that surprising. But they are affirmative, and a useful reminder that in order to be useful and helpful to others, one must first be useful and helpful to oneself. An encouraging and enlightening show.

When did you last feel alive?
Fifty, frumpy and full of inhibitions, newly divorced Julie is searching for the sex life she once had, declaring, “I’m not ready to be put out to pasture yet!” Hurling herself
into the modern dating scene, Julie shares her experiences with raw humour and engaging honesty, introducing us to the range of characters who have helped (or hindered) her transition into an empowered woman living her life and having that elusive fun.

But what does it take for Julie to truly become herself, and does she have the inner courage? What is required of any man or woman to live their truest life in a world that wants us to settle for ‘fitting in’? Expect tears, truth and revelations aplenty in this warm and witty solo play which made a sparkling Edinburgh Festival debut in 2019, and now tours in this specially extended version.

After an absence of two years, it was so good to be back under Waterloo Station at the first week of … END_OF_DOCUMENT_TOKEN_TO_BE_REPLACED

After creating the “absorbing and provocative” Version 2.0 and the “eminently lovable” Letters, … END_OF_DOCUMENT_TOKEN_TO_BE_REPLACED