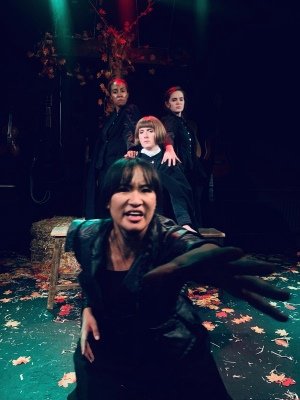 I had a brief conversation with the artistic director of another Islington playhouse whilst making my way to the Hope Theatre, and when I said I was going to see a show that explores witch hunts, his immediate point of reference was The Crucible, the famed Arthur Miller play. It’s the acknowledged point of reference for Call Me Fury’s writer, Sasha Wilson, who begins by holding up a copy of The Crucible and asking for a show of hands of those who have studied that play.

By exploring the same events in Salem, Massachusetts in 1692, Wilson then goes on to say that the play has attracted criticism, as though it is trying to do ‘better’ than The Crucible, or treading on its apparently untouchable ground (the negative lines of argument from her critics is not elaborated on). What this production attempts to do is put the women accused of witchcraft – some of whom were girls – centre stage, and to piece together what actually happened rather than the sheer dramatic licence deployed in Miller’s play, which uses the right names but is otherwise a fictionalised version of events.

That isn’t to say there isn’t creative licence deployed here – it is not possible, for instance, as the play acknowledges, to know for certain what was said between the young ladies as they were awaiting trial or, later, sentencing – or, even later, execution. The Church is treated unsympathetically in this production: the local minister (as per The Crucible, oddly enough) is perceived as fundamentally uncaring towards his parishioners and those in need, whingeing about not being paid properly and not having enough supplies of firewood. The Bible is dismissed as a work of fiction, allegedly an elaborate vehicle dreamt up by men in order to subjugate women.

Whatever one’s views on organised religion (I’m not exactly a fan), the production is careful to acknowledge where there is ambiguity with regards to a narrative point. Salem Village, now called Danvers, isn’t the only place that the play draws from: a case of purported witchcraft happened in London as recently as 2012, essentially child abuse culminating in murder. Then, of course, there are miscellaneous cases from centuries ago. There’s some relevance to contemporary times inasmuch as there are false accusations made against innocent parties in the early twenty-first century as there were in the late seventeenth-century, with convictions being made on the flimsiest evidence imaginable.

Wilson and her three co-stars, Mairi Hawthorn, Gracie Lai and Olivia Kennett, play many characters between them, whilst also sharing the role of narrator. Various stringed instruments provide a varied atmosphere – the last big number, for instance, is a jaunty tune but is also a countdown to a hanging. The actor-musicianship is seemingly effortless. As the production goes out of its way to name many of those convicted during the Salem Witch Trials, as well as give the audience some of their backstories, I hope it is not too much of a spoiler to recall some of them here. Tituba was, so the play says, called by a different name but slave masters found this slave’s real name too difficult to pronounce, so ‘Tituba’ is an approximation. Then (amongst others) there’s Abigail Williams, Bridget Bishop, Elizabeth Howe, Sarah Good and Rebecca Nurse.

This is a sweeping generalisation, granted, but it is interesting that people tend to know more about key political leaders or celebrity figures than they do about those who have suffered the kind of injustice that these people, whom the play refers to as “sisters who have fallen”, endured. That the stories of those who were once silenced are being kept alive in this absorbing and enriching play is commendable.

“The fire of fear is the only flame that burns bright.”
The winter of 1692 was cold and Salem Village finds itself under attack.
CALL ME FURY is about The Witch Trials. Sort of. A feral scream of rage, this play is a commentary about sexual politics and feminism today.