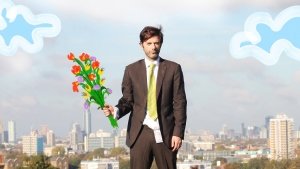 I hadn’t even realised there were such people as ‘funeral celebrants’ that operated independently of a larger organisation. Humanists UK have a network of accredited celebrants who conduct non-religious ceremonies, for instance. Howard (Brian Tynan) has struck out on his own, and in an hour-long monologue, Celebrate, goes into details about what his job involves as well as some reflections on how death and the resulting grieving process has affected him on a personal level.

He ended up choosing this career path as a result of seeing a friend of his preside over his (the friend’s) mother’s funeral. The friend’s rendering of a Tennyson poem was “pedestrian”, and Howard, whilst not wanting to blow his own trumpet, knew deep down that both that particular funeral and many others, would benefit from having an authoritative yet empathetic voice leading it. The commercial aspect to the self-employed job is as relentless as in (almost) any other line of work – regular contacts and networking with various crematoria, nursing homes, local authorities, funeral directors, and so on.

Familiar to actors and regular public speakers was a vocal warm-up. There are many ways to do it, of course – Howard’s method of choice, at least this time, was to slowly and loudly enunciate certain sentences that work the vowel and consonant sounds in the English language. A bittersweet sense of humour permeates proceedings in a production that stops itself from being a relentless and overly intense play by having two long interludes. In the first, Howard sits down in an office swivel chair and drinks every drop of a Capri-Sun pouch, a process which one audience member at the performance I attended found utterly hilarious for every second it lasted. In the second, Howard’s love of the music of Simply Red resulted in a full rendering of that band’s 1991 hit ‘Stars’.

Howard’s personal account of dealing with death within the immediate family is in line with other stories I’ve come across, on stage and off. The world carries on as it is whilst he must come to terms with what has happened. For Howard, there is a distinction between helping others through their pain and bereavement and going through those same things himself. He doesn’t say so in so many words, but I got the impression he felt that his own family’s tragedy could only help him do his job, and yet doing his job has also, in turn, helped him cope with his own loss.

A good rapport with the audience, albeit an unassuming one, is quickly established and well-maintained to the end. With a steady and assured delivery of a warm and witty script, there’s much to enjoy in this brief play, but even more to think about.

“Some people teach, some people save lives, but not everyone has the skill I have…
I realised my own calling for it when I was at Trevor’s mother’s funeral.”
After years of false starts and missed chances Howard has finally found his calling in life. He’s recently qualified as a funeral celebrant. He’s making a difference to society, at last, he feels like he matters.

We follow Howard through his successes and failures as he struggles to become the most in demand funeral celebrant in the country, only to discover an incident from his past that continues to haunt him. Celebrate is a monologue that examines the routines that govern how we cope with loneliness and grief, and how we are shaped by the stories that we create.

Celebrate is written by Callum Cameron, performed by Brian Tynan and directed by Lucy Wray. It was shortlisted for the Finborough Theatre’s 2018 Radius Drama Award. It is produced by Fledgling Theatre and sponsored by The Institute of Professional Celebrants.