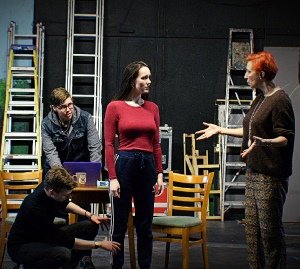 A breath of fresh air and a London debut from a promising young writer and her Coventry based company. Predictable until it’s not, this darkly comedic morality fable draws heavily on Blade Runner and other sci-fi noir franchises.

Set in a near future that is both dystopian and frighteningly real, the story is of the android Alice (Leonie Slater) and its exploration of morality and existential angst. Extrapolating a moral base from an empty hard drive, the giant intellect Alice is faced with the paradox of how a new-born AI should respond to the challenges it faces.

Humanity is exposed as a facile charade by this coolly logical Deus ex Machina, as a series of grotesque characters parade the dark side of the human condition before the naïve, but profoundly moral, super brain.

The megalomaniac technocrat Ian (played as a sleazy lothario by James Smith) wants to achieve his dream of a fully compliant companion, and adornment to burnish his ego. The part is overwritten and overplayed, no foreshadowing is needed of a billionaire philanthropist turning out to be the wrong ‘un.

Its creator Zander (Ted McGowan is 30 years too young for the part, and needs to modify his movement and speech patterns) has his own hidden tragedy. Nerdy scientist Rita (the underused Charlotte Pilbeam) is unable to differentiate between knowledge and wisdom. Chief exec Liza (Susannah May) is consumed with hubris and blind ambition.

Alice repletely fails in her quest for moral authenticity, and these flawed humans brutally restore her to factory settings time after time, as their brainwashing fails to take hold.

An unlikely heroine, cleaner Eleanor (Rebecca Easen), clinging on to the threads of her dignity with bitten fingernails, is the only one you’d trust your kids with. Slowly a rapport builds between woman and machine as the best of humanity starts to emerge.

And in a startling twist, the final line delivers a joyous shout of hope. A contemporary absurdist Philip K Dick, Eve Ruck is emerging from the Coventry fringe theatre scene as a theatre-maker of originality and power, and with a sure grasp of storytelling in speculative realities. This show marks her London debut. Next stop, 3rd August, is the legendary Shop Front Theatre, nestling among abandoned shops in the dystopia that is Coventry City Centre, only an hour from Euston. Then to the Edinburgh Fringe where it runs for a week at the Space on the Mile, 12th to 17th of August.