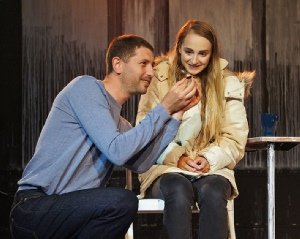 One of the distinctive features of a short play is that the writer has to introduce their characters fast and the audience have to make their mind up about them at once. On the whole, this works. A short play doesn’t have the time for huge character development so you are probably going to feel the same about the characters at the end as you did at the start. But this is not a hard and fast rule as Simon Stephens demonstrates in his one-act play Country Music which has recently opened at Clapham’s Omnibus Theatre.

Starting in a car sitting in a lay-by, Country Music is the story of Jamie (Cary Crankson) a troubled teenager who has done something bad. He has stolen a car – along with various snacks for the journey – and picked up his schoolgirl girlfriend, Lynsey (Rebecca Stone) to run away to Southend. Whilst the plan sounds good in theory, Jamie has a volatile personality that varies between extreme excitement and violent lows, and is pretty unsuited to this type of escapade, something Emma, who may be younger but seems much more mature and sensible, points out. Jump forward 5 years and Jamie is now in prison being visited by his 13-year-old half brother Matty (Daro Coates). Being a prison, the chances of this being a happy visit are limited, but things are worse on this occasion as Matty has some news that he knows is really going to upset Jamie. Before the news comes out, the two of them discuss different things, including the crime that has put Jamie into prison, and how he is doing as a guest of Her Majesty. Time and prison have changed Jamie and, although he still has a certain amount of volatility in his reaction to things, he seems much calmer. Even when Matty delivers his devastating news, Jamie reacts in a more restrained way than you would expect. Jump forward again and, in a seedy Sunderland bedsit, Jamie is meeting his seventeen-year-old daughter Emma (Frances Knight) after a long, long separation. Indeed, she barely knows this man who is her father. Their reasons for meeting are totally different. Jamie wants a chance to reconnect with a daughter he hasn’t seen or heard of in years, and Emma wants to satisfy her curiosity as to who this stranger is.

As I was sat watching Country Music, one of the things that really struck me was that this was a well-written piece of theatre that used silences to tell so much of the story. Now, that may sound odd but it is very true. There are a lot of moments when there is no dialogue and that is a really powerful tool in the hands of a great story-teller. All four characters in this show are complex human beings and, over the roughly 70 minutes runtime, it would be very difficult to tell their individual stories with words. But silences, as the characters sit together or just alone, give the audience a chance to get inside the head of the characters and work out what they are thinking. This technique really impressed me as you have to be a very assured writer to let actors sit there silently, without the audience becoming restless. And this production under Director Scott Le Crass does it very well. The play itself consists of four tightly written two-handers, with Jimmie in each of them. In the summary above, I’ve only described three of the scenes as the fourth is something you need to experience for yourself.

Liam Shea’s set consists of a raised platform, mainly occupied by a table and two chairs with ropes coming in from the sides. Now, this may the total Dr Who nerd in me but I felt the ropes represented a series of individual timelines, all converging on one person, Jamie. If that was what the designer was going for, then bravo because it worked perfectly for me.

Cary Crankson is outstanding as Jamie. Not only does he have to go from 18 to mid-30s but he also has to get the audience on his side. My companion and I had quite a conversation about Jamie – which goes to show how good the performance was. Initially, he is a typical chav thug that we would normally cross the street to avoid. But, over the course of the show, you start to feel sympathy for him and even – without giving anything away – develop an understanding of why he is the way he is. By the end, you are really hoping he will have a full and happy life, though the chances are it won’t happen. Cary has to be commended for his portrayal of this complex character. The other actors were equally as good in their roles though, for me, I felt that Dario Coates looked too ‘grown up’ and self-assured for a young teen I think about myself at that age and how I would have reacted to visiting someone in prison. Although Dario was really good, of the characters, Matty was the one I had most trouble connecting with.

Having said that, I thought overall Country Music was an extremely intense, interesting and thought-provoking play. It started out making you feel a certain way about Jamie, then spent the rest of time showing you why your initial assessment was wrong. It provoked a long and intense discussion between myself and my companion, which is the mark of a first-rate piece of writing and production.

1983, Gravesend. Jamie has committed a crime. What he doesn’t know is that this event will shape the next 20 years of his life. Originally presented at the Royal Court Theatre in 2004, Country Music is a subtle, yet powerful play by Simon Stephens, whose work includes the multi award-winning The Curious Incident of the Dog in the Night-Time and On the Shore of The Wide World.

A play about protection, atonement, but also about how our experiences and circumstances can define who we are, but not necessarily who we become.