Home » Reviews » Play » I, Cinna (The Poet) Write a Revolution at the Unicorn Theatre | Review 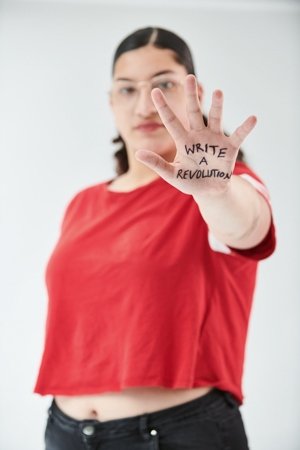 I remember reading the death of Cinna the Poet in Julius Caesar a few years back and thinking how odd it was. The innocent poet makes his way to Caesar’s funeral, but is accidentally mistaken for Cinna the conspirator and killed. We’re taught from a young age the old sticks and stones saying, but in Tim Crouch’s lonely wrestling with
Shakespeare’s lesser-known romantic poet, it turns out words (or a lack of, even) can hurt us, even kill.

Crouch’s text interweaves fragments of writing tools, thoughts and ideas about the power of language. He parables categories of words with a social power structure: the little words, the a’s, but’s and if’s – as suggested by the audience – are the slaves to the nouns, which are coloured by the most powerful of words, the adjectives. He tells us this in front of a table, a kettle and jar of tea bags which sit on a wonky cardboard box; a large crumpled white sheet of paper hangs as a backdrop of Lily Arnold’s set. It’s a tricky thing to cling on to as each draft of poetry is scrumpled up and thrown in the bin.

We’re provided with our very own notepads and pencils on our way in. Crouch checks we’ve all got one. Someone doesn’t, but we manage to get one to him. There’s a sense of “we’re in this together”. We’re encouraged to speak out, to write down words on the notepad. To eventually make up our very own poem, something that Cinna the Poet really struggles with.

The conspirators in Julius Caesar want to make a republic, to take down the monarch and create a society without a leader, where everyone is equal. We write down the leader of this country. We call him disgusting, blonde, nasty. It’s mostly adults the night I’m in so we’re potentially a little too polite, but the kids in the audience have got the words right.

Crouch’s manner is almost eerily warm as we witness the internal struggle that he performs for us, as Cinna the Poet. He thinks about the value of poetry, of language and art, at a time of political turmoil. Can words really save us from a bloody war?

It doesn’t, I don’t think, come to a conclusion exactly. But I think we realise that words do have power, and it’s not a waste to use them. It’s a human right. It’s a freedom. Maybe we don’t see this properly until they’re taken away from us? Media censorship. Imprisonment; death. What would your final words be? We think about this. There’s a lot of food for thought here.

We’re told to use our words. To write a poem. The idea that politics can be separated from art is ludicrous. It’s really hard to write these days. I realise this as my hand freezes at the attempt to jot down my own words in the little notebook. There are too many distractions. Cinna’s phone keeps bleeping and interrupts the flow.

Crouch delivers a mature introduction of the story to its targeted 11+ audience. He invites a conversation, which I imagine is refreshing for an average lectured-at school crowd. There’s blood and violence. All the things kids love to watch. And the text is perfumed with gorgeous poetry, with sentences that spritz, punch and linger in the air.

It’s a finely crafted introduction to the work, boldly presented in Naomi Wirthner’s production, with Will Monks’ video & lighting design and Owen Crouch’s sounds that puncture the undercurrents, revealing the very grown-up realities that are found beyond the pages of a 16th-century playtext.

The poet Cinna hardly says a word in Shakespeare’s Julius Caesar before he’s mistaken for someone else and torn to pieces by an angry mob. He’s Shakespeare’s unluckiest character. Now Cinna searches for the subject of his next poem and invites us, the audience, to write with him, live.

This brilliantly clear introduction to Julius Caesar is a unique and warmly engaging solo show about words and actions, art, protest and power.

Tim Crouch is an internationally renowned playwright and theatre-maker. I, Cinna (the poet) is the fifth play in a series about Shakespeare’s minor characters. Tim’s recent play Beginners premiered at the Unicorn in 2018, played to full houses and critical acclaim, and won the Writers’ Guild Award for Best Play for Young Audiences.

I, CINNA (THE POET)
WRITE A REVOLUTION.
Written and performed by Tim Crouch
Directed by Naomi Wirthner
5th to 29th February 2020
https://www.unicorntheatre.com/