You are here: Home / Reviews / Play / Julius Caesar at the Lion and Unicorn Theatre | Review 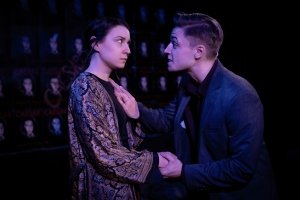 I suppose this is Shakespeare for those with busy lives, condensing the five acts of Julius Caesar into 75 minutes – by contrast, the 2018 Bridge Theatre production lasted 120 minutes, while the 2017-18 Royal Shakespeare Company production at the Barbican Centre went on, including interval, for two hours and 52 minutes. There was even a production at the Barbican in 2005 that rattled on for three hours and 25 minutes. Although this particular version has a lot going for it – the relatively stripped-down set allows for Shakespeare’s text to shine – there are points at which it feels as though it is going a little too quickly, like the schoolboy who reads a passage of a book aloud with ever-increasing speed until the teacher intervenes and calls for a more moderate pace.

The thing that I’ve always found curious about Julius Caesar is that the title character (here, Aimee Kember) dies in Act III Scene I, which in some productions is just after the interval and in some others, just before. This leaves a huge chunk of the show in which the character for whom the play is named isn’t there – although, as those familiar with the play will tell you, what happens thereafter is evidence enough of Caesar’s legacy among certain characters that remain. Here is the litmus test: putting oneself in the shoes of someone who has not seen the play before (easier said than done), is it possible to follow proceedings?

In a word, yes. One does at least get the gist of it. The salient points are all there, and after a fairly subdued half an hour or so, the production undergoes a step change. What might have been termed a ‘kinder, gentler’ approach gives way to the kind of performances the RSC would put in, with speeches from Brutus (Matt Penson) and Mark Antony (Niall Burns) pitched very loudly, but not overpoweringly so given the studio space. Losing the interval works – interest is more easily maintained after Caesar’s fall.

Contemporary costumes are used against a backdrop of eighty-one large posters (despite the breakneck pace of the show I still managed to find time to count them all), each with Caesar’s face on them. Minimal alterations have been made to the text, however, and if the production were truly contemporary, perhaps what goes on would have been filmed by someone with a smartphone.

There’s something to be said, nonetheless, about the plight of people who are taken by their own hand – something that still goes on today – and what it is that draws them to take such drastic action.

The way in which the crowds of Roman citizens were portrayed on a small stage space was simple but inventive. A modern parallel could be drawn between the play and a certain self-obsessed political leader together with those who seek to bring him down, if impeachment could be seen as a metaphorical sword. Cassius (Alex Bird) indeed “has a lean and hungry look”, while Casca (Aimee Pollock) comes across as the sort of person loyal to the cause.

There’s proof in this show that copious amounts of fake blood are entirely unnecessary to deliver a shock factor, and there’s more to this tale than mere violence. A brief and thought-provoking production.

William Shakespeare’s Julius Caesar in one act!
Same story. Same words. In one act. Blink and you’ll miss it.

Shakespeare can often feel intimating or only for a select few. However Shakespeare is exciting, thrilling and (most importantly) for EVERYONE.

Fearful that Caesar will become a tyrant, his friends plot to assassinate him in order to save Rome. But the conspirators’ high principles clash with personal malice and ambition, and as they vie to manipulate the mob, the nation is plunged into bloody civil war. A taut, profound drama exploring power and betrayal, Julius Caesar exposes the chasm between public appearance, political rhetoric and bitter reality.