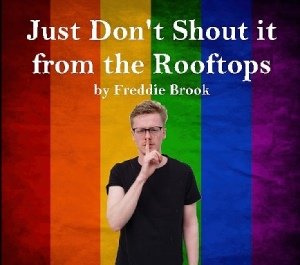 Of all the things members of the LGBT+ community go through in their lives, probably the hardest is the first time they decide to ‘come out’. Everyone has their own story to tell, and they are all unique in some respect. My own involved the answer to a Trivial Pursuit question, a famous male singer, and a very perceptive elderly lady.

Actor, magician, theatre and opera director Freddie Brook has spent the past few years collecting some of these stories and turning them into a one-man verbatim show called Just Don’t Shout it from the Rooftops which he has recently been performing at the King’s Head in Islington.

Over the course of the roughly 45-minute run, Freddie brings to life a range of individual coming out stories and demonstrates the many different approaches both the outee and the recipients of the information take to the news. There is the young lad who, in the words of his less than sympathetic parents, ‘ruined the family holiday’, the soldier who took on a regiment and the son of a publican, forced to confront his fears. Each tale is unique and each feels very real in Freddie’s more than capable hands.

At a time when homophobic and transphobic hate crime is on the rise, and when the most powerful man in the world seems hell-bent of rolling back LGBT+ rights, Just Don’t Shout it from the Rooftops is a welcome addition to the LGBT+ theatrical stable. Freddie has said that this is a work in progress and that he would like to tour it in schools and colleges. From what I saw, it was pretty much a completed work. I think the only thing I would add would be to identify the name and age of each participant as they start their story. Knowing that story 1 is coming from “Paul aged 16 at the time” would, I think add that little extra bit of connectivity for the audience watching.

All in all, a first-rate piece of theatre that raises awareness and will give hope to many a worried person not sure whether they should take that one small step and one giant leap out of the closet and into the world.

A new one-man verbatim show focusing on different people’s experiences of coming out to their friends and families.

‘I didn’t, think I was gonna get that reaction at all. And just like sat there watching the pair of them thinking “I’m so scared… I’m so scared about this like, what’s gonna happen… here”’

‘I, told my parents, it was like – “Oh that’s nice dear, put the kettle on”’
‘He told my mum that he would rather chop off his right arm, then have, a gay son

Over the last 2 years Freddie Brook has gathered interviews from people across the UK and the world on their experiences of coming out to their friends and families. Some interviewees came out in the 80’s, and some much more recently, some had a difficult time, and others didn’t. The whole range of experiences amounts to an entertaining yet poignant piece.

Freddie plays several parts in this piece, including a soldier who came out to his entire regiment in a very flamboyant way, a Christian who faced an extremely negative reaction from his parents and tried to run away from home, and even his partner’s Australian mother who raised a transgender child. He will be bringing those stories to life onstage in a powerful piece of new writing that highlights how far LGBTQ+ rights and acceptance has come across the world, whilst also recognising how much work there is still to do.

Homophobia is still rife in many parts of the UK, especially in more rural areas outside of the big cities. In 2016 approximately a quarter of homeless teenagers were LGBTQ+. The intention is to tour this piece to schools and community centres to help others gain more perspective on what coming out can be like for all those involved. This work is constantly developing and should you have any feedback Freddie would be very grateful to hear it after the performance.