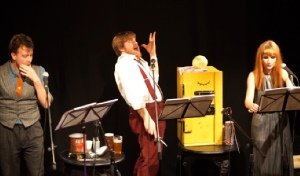 In the 1940s and 50s, horror was all over American radio with series like The Whistler and CBS Radio Mystery Theater. More than half a century later, the genre is ripe for parody and it was doubtless with that in mind that the actor James Carney launched The Unseen Hour, a stage show that captured the absurdity of the original broadcasts perfectly, with their hammy acting, melodramatic sound effects and risible plots drawing on the ludicrous stories of HP Lovecraft and others.

Interspersing the drama with monologues or songs, the weekly live performances were turned into a fortnightly podcast from March 2017 to January 2019.

Nine months later The Unseen Hour is back, with a Halloween special – ‘Callirrhoe’ – playing at the Pleasance as part of the 2019 London Horror Festival. Essentially a 30-40 minute radio play, a horror comedy about corporate corruption, product testing and mutated teenagers is interrupted by interludes that are pleasant enough yet add nothing but length to the evening.

Among the cast of three, the multi-voiced Joey Timmins is outstanding – she surely has greater things ahead of her – while James Carney produces a series of not always convincing sound effects and channels Hugh Dennis and Peter Sellers. Completing the trio is Brice Stratford as the cowardly ‘Rufus Strideforth’ whose shouty braggadocio owes too much to Matt Berry and becomes very wearing very quickly. The plot of the new episode is on the same lines as the original podcasts and, while some of the jokes are also familiar, the new episode is at least as funny as its predecessors and certainly enough to confirm the thought that The Unseen Hour would be completely at home in a late night slot on Radio 4.

Bizarre horror comedy podcast The Unseen Hour returns for a Halloween special!
A surreal radio drama live on stage with three actors playing ten roles and creating live foley sound effects, plus guest performances and live music in a brand new tale of the uncanny, the macabre and the absurd.