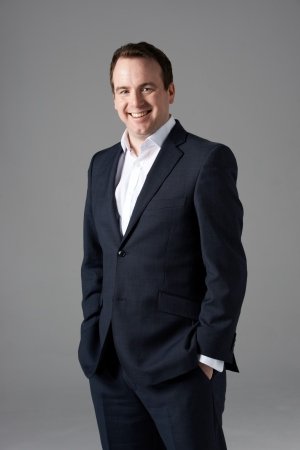 Andrew Neil is having a bad time: not only was his flagship late-night politics show shelved, he was also denied the chance to interview, live, prospective PM Boris Johnson. And to cap it all he lost the ability to be impersonated by stand-up comic and politics satirist par excellence, Matt Forde. Yep. It’s true.

Amongst all of Forde’s wonderful re-creations of our excruciating political elite Neil deserted him in his hour of need, coming out all Gerry Adams with a touch of Glenys Kinnock. To be fair, Forde was the first to concede that Neil was undergoing mis-enunciation through his normally versatile vocal chords but, wherever Neil was in the deep recesses of the lampooner’s flexible hive mind he wouldn’t be dragged out in all his usual acerbic Scots glory. Never mind. This brief aberration didn’t dim the illumination of Forde’s non-stop roller-coaster rampage through the politics of the recent past.

Forde’s a great mimic. He gives good Corbyn – arguably better than Corbyn does himself. His Boris runs the full gamut of vacuous, extended arm-flopping, smirkily knowing, nonsensical blather. And his Trump, frankly, makes Alec Baldwin – who relies on the wig and make-up that are completely shunned by Forde – look like amateur hour. My take on this is that Forde’s research is immaculate. Not only does he watch these… I was going to say people – but no… not only does he watch these caricatures he does what any self-respecting actor does when building a character – he gets inside their heads. And instead of giving us a caricature of a caricature he gives us the living entity and my word it is funny.

Because Forde is also a great comic. He holds the stage with aplomb and takes us through what is very familiar territory as he dishes out all that stuff we wanted to dish out when we screamed at the TV, through the last few
years of seemingly interminable political strife, principally concerning Brexit but also concerning lies, damned lies, statistics and Richard Burgon.

Talking about the minutiae of research Forde read the whole of the Labour manifesto. Every word. 25,574 words in fact. That’s dedication. Dedication to one’s art. You could say he read the many, not the few. In fact he is the only person in the UK, I am reliably informed, who read every word. Boris glanced at the first line and pronounced “Same old Labour”. Corbyn didn’t get past the cover. And Burgon, as Forde points out in his best Yorkshire Burgon burr, thought it was better than the manifesto that won Labour the last election in 2017.

There’s definitely a rich seam of comedy gold in the extraordinary politics that have held the nation in a vice-like grip over the last few years and Forde is an expert in mining that treasure in his laugh-a-minute diatribe against the politics of farce. In the end, after the tumult and turmoil of the Brexit years, I think Forde’s message is: let’s all let Burgons be bongs gone. So that we can quietly lurch towards the next fine political mess we’re going to get ourselves into.

It’s a great show: catch it if you can.

Matt Forde’s Brexit, Pursued By a Bear is at Soho Theatre until Saturday 25th January before embarking on a nationwide tour. Matt will visit London’s Southbank Centre Purcell Room on 10th and 27th March and London’s Bloomsbury Theatre on 2nd May. For full tour information please visit www.mattforde.com/live