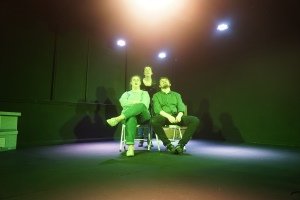 In December 2016, the singer Alison Moyet was caught up in one of many Southern Rail delays, which were so bad questions were eventually raised in Parliament. “Sod Brexit. We can’t even leave East Croydon. #RailFail”, was one of her more publishable remarks on social media, with others also making their frustrations known, some with photographic evidence of overcrowded platforms and paying railway customers unable to board trains due to the sheer weight of passenger traffic.

Mission Creep considers an exit far greater than getting away from the local railway station or leaving the European Union – leaving the planet altogether. It may be the stuff of the future, and even then, the selection process as to who gets to leave Earth permanently is rigorous, because this space programme, like everything else, has a finite budget. This space agency wants to do what it can to ensure human life continues in some form and is working under the assumption that (for reasons made clear in the narrative) life on Earth is not going to be viable for much longer. The space agency is entirely British, with many of the details of this ‘relocation project’ kept secret from other countries in the interests of security.

Enter Liam (Charlie Maguire) and Tess (Emilia Stawicki), who aren’t in love with one another, but instead good friends. Liam describes himself as bisexual, Tess as asexual, but to qualify for relocation, they must pass themselves off as a straight couple ready and willing to procreate in space. The issue here is not, of course, sexual orientation, but that they are, in Liam’s words “lying to the Government”. Mary (Carmelia Brown), a member of staff at the space agency, assesses the ‘couple’s’ suitability, and (without giving too much away) there are several moments in which the pair might not make it, as the background checks and interview process is lengthy and detailed.

Mind you, I had a meeting with a mortgage adviser in a high street bank recently which lasted longer than the running time for this play. But as far as this production is concerned, there’s still a lot of ground covered before anything actually happens – it’s a lot of talking heads, with Mary even enquiring about their social media profiles. The stakes are gradually raised, and the expectations placed upon Liam and Tess become increasingly absurd. But they are, somewhat hilariously, simply too British to put their feet down and insist that ‘No’ really does mean ‘No’.

In all the humour there are some serious points subtly made about personal integrity and whether it is right to continue on a path where the forthcoming challenges are considerably greater than previously imagined. Much is at stake for all three characters in different ways, as well as for several off-stage characters (the entire play is set in a single meeting room at the space agency). I suppose there is nothing new about people who lie, and then find themselves having to create more lies to substantiate the first lie to avoid admitting they lied in the first place. The context of what is going on in the wider world contributes to the characters’ irrationality – not for nothing are their smartphones periodically making sounds to denote another news update.

There’s a brilliantly witty moment towards the end of the play when Mary turns what Liam and Tess have told her into the vocabulary of the corporate boardroom. It’s wordy, it’s convoluted, but it’s a hoot, as is much of the show overall. Despite an unexpectedly alarming conclusion, the play gently encourages its audiences to live life and live it well – we never really know how much time we have left.

mission creep: noun. A gradual shift in objectives, often resulting in an unplanned long-term commitment
Tess and Liam are determined to get off the planet at any cost. On paper, they’re the perfect applicants for Britain’s intergalactic relocation project: they’re young, fertile, and their queerplatonic relationship might even pass for heterosexual bliss. All that’s left is to get past Mary and the interview…and if they have to do one or two extra things to impress the panel, isn’t it worth it to avoid the apocalypse?

This world premiere opens just before Asexual Awareness Week on October 20th!
It’s the perfect time to see a new play by an emerging asexual playwright, featuring a dynamic asexual protagonist, and asexual and bisexual solidarity IN SPACE.

Mission Creep began as a short play in early 2018, making the rounds at scratch nights hosted by Cuckoo Bang Productions, Controlled Chaos UK, and Unmasked Theatre. With their support, it was developed into a full-length play.

“The piece achieves a balance between comedy and an undercurrent of horror, discussing being bi, being asexual – and being watched, filmed and trapped into something you never signed up for.” Sussex Playwrights.