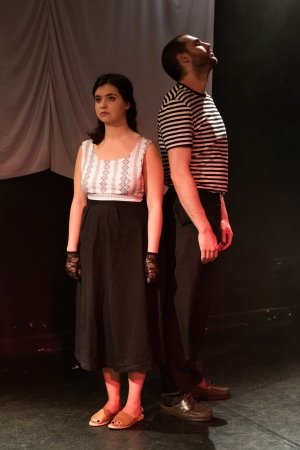 Antonia Georieva’s play Muse is based on the life of surrealist photographer Dora Maar and her relationship with Pablo Picasso. As the audience enters, the entire cast are already present evoking the image of a Classical Greek Chorus.

The play opens with the cast undertaking an inventory of Dora’s possessions: they note; her photographic equipment, her photographs, presents from Picasso and some of his paintings of her. They then tease one another with a skull that they find. This is the skull that Picasso painted in 1942 as “Nature Morte au Crane de Boeuf”. This is what is left at the end of Dora’s life, the sum of her career and various exploits. The action then moves back in time to a young woman sat alone in a Parisian cafe in 1936 playing a dangerous game with a knife, her life is changed forever when the painter Pablo Picasso (Jahmai Maasai) approaches her table at the cafe and engages in conversation with her. Denitza Zafirova performed the role of Dora Maar in a one-woman production and is now completely at home in the role in this extended production. The shock and chaos of the Spanish Civil war and the ensuing destruction of Guernica caused Picasso to turn to Cubist fragmentation, the style he then adopted for a long series of portraits of Dora who acted as his muse for many years.

Sarah Kentish plays the beautiful mournful Marie-Therese Walter who Picasso met when she was 17-years-old and made her a promise that he would never again paint anyone but her. They have a child together but Picasso tires of her, and leaves her with almost nothing when he instead directs his attentions towards Dora. Dora was the weeping woman in the famous portrait. Picasso took her tears, her sanity, her art, and put them in his painting. When he inevitably tires of Dora too he tells his friend Paul Eluard (Harry Kingscott) to sell some paintings and buy a house for her. He moves on to another young lover leaving Marie-Therese and Dora both pining for him and hoping for his return. Dora tells her psychiatrist that she thinks of Picasso every day but when he dies she cannot cry for him anymore. She is left alone with her box of photographs, the only lasting remnant of her relationship with Picasso and their time spent together.

This is a beautiful, moving production. The tiny black box of a stage is cleverly changed to depict various different settings with the use of a large swathe of white material. The small number of props have been carefully chosen and do not clutter the stage, thus not detracting from the main force of the performance of the actors whilst still effectively enhancing the production.

Denitza Zafirova and Jahmai Maasai are both mesmerising in the central roles but the whole cast and production is wonderful. This is a great little play that shows how the lives of many women were sacrificed for the creation of
Picasso’s art.

In a Parisian café a young, raven-haired woman plays a dangerous game. The year is 1936. The fascist regimes that will soon lead to WWII and the unraveling of Europe are on the rise. Based on the life of surrealist photographer Dora Maar and her relationship with Pablo Picasso, Aslant Theatre Company’s debut production MUSE explores the inherent violence of the relationship between artist and muse.

In anticipation of the largest retrospective of Dora Maar’s work at the Tate Modern later this year, MUSE takes the audience on a surreal journey through time, colors, tears, and fragments. The production asks what is the price to pay for a place in the long halls of art history as Picasso’s “Weeping Woman”.

After a highly successful off-Broadway run, Alex Edelman has brought his one-man show Just for Us to … END_OF_DOCUMENT_TOKEN_TO_BE_REPLACED

Marvel has a friend who is a ghost, and the ghost falls in love, but a crazed police officer, … END_OF_DOCUMENT_TOKEN_TO_BE_REPLACED