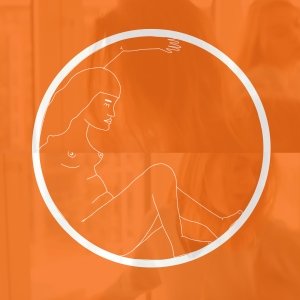 Unless I’ve miscounted, which is entirely possible mostly because I didn’t think to keep a tally at the time, there were ten ‘ask the audience’ moments in which the audience was asked to choose between two options in order for the storyline to advance. I doubt, mind you, that the overall outcome would have been any different, particularly as the unique circumstances of this story quite quickly lead to a fairly narrow interpretation of the law. The facts appear to speak for themselves in a case where the defence counsel can predict with almost pinpoint accuracy how proceedings will develop.

Diane (Katharine Hardman) welcomes Aria (Elle McAlpine) into her reasonably furnished office – there’s considerably less paperwork here than I’ve ever seen on any lawyer’s desk: perhaps a negligible point in an ultimately gripping narrative, but as Diane nonetheless focuses on attention to detail, I trust the production won’t mind too much if I do the same. Given Aria’s tendency to major on minor matters – possibly as a result of some sort of anxiety disorder – the character could, for instance, have made more of a fuss with regards to a genuinely messy office. As it is, she fusses over a singular object on the carpet.

The main matter in hand, however, is an objection to Aria having a termination: the man with whom she had relations with, identified only as Lee, wants the baby. Unable to agree, Lee has brought his wishes before the courts. A range of different opinions on the matter come up during the course of this brief play, which manages to avoid demonising everyone who takes a different view to Aria.

Diane’s mantra, “they feel, we think” is rightly questioned by Aria fairly early on in the play, and at least partly thanks to a plot twist, eventually completely falls apart. In short, at the risk of pointing out the obvious, men, women and people outside the binary spectrum both feel and think. I realise this is a bit like telling you six sevens make forty-two.

And here’s something else: while voting for X or Y certainly helps with people’s engagement with the show, some of the decisions the audience is invited to make are, to be blunt, trivial. For instance, the audience is asked, “Are you ready?” which, to be fair, made me wonder what would have happened if a facetious majority had said, ‘No’. But elsewhere, there’s a question as to what sort of takeaway should appear on stage, and another as to – wait for it – what colour dress should be worn in the subsequent scene. This sort of thing must have been more fun if the topics and themes being explored weren’t quite so serious. Maybe the intention was light relief, but it came across as more than a little jarring.

The emotional and psychological toll is substantial, and the play does well to portray this without indulging in any melodrama. Quite commendably, the play also gives the potential father-to-be a voice. The selective use of microphones, something which your reviewer saw repeatedly during Edinburgh Fringe 2019, seemed unnecessary in a studio theatre space where both actors could be heard just as clearly without them. The choreography in between scenes is a welcome addition to the production. A good effort for a first play, some tweaking and tightening is still required, and all things considered, an important and pertinent subject matter is raised in a thoughtful and compelling production.

Questions around the fraught and topical issue of the beginning of life are tangled up and unraveled in Elle McAlpine and Katharine Hardman’s first play OVA. Aria is pregnant, and wants a termination, but Lee wants her to carry his child and is willing to fight her in court. Diane is Aria’s only hope, a determined and visionary lawyer with the motto “they feel, we think”. Only Diane has her own crushing and complex loss to feel her way through, a loss that is linked inextricably to the content of her case. Together in Diane’s office, in the stands of the courtroom, these two woman navigate a system fraught with historical weight whilst simultaneously creating a deep and unbreakable alliance between them. Inspired by real conversations and experiences, OVA combines movement to explore and express that which is beyond words, that which is intrinsically physical with an honest conversation about choice.

We are quick to draw lines where our awareness stops. With a voting system in place throughout, we will let you choose, let you become an integral decision maker to the choices these characters make.

As two women dance as if their lives depend on it, you are invited not only to watch or bear witness, but to vote. You will decide. You will become our Jury.