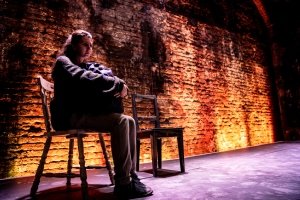 I often complain (and, in my humble opinion, justly) about transport delays in and around London, and indeed elsewhere. It’s not pleasant to be stuck on the London Underground, for instance, especially when on the way home or – as can and does happen – on the way to a show. It is one thing to escape from the vagaries of the Jubilee line, but what about if one is trying to escape from one’s own country, one that is falling apart? I’m not talking about That Referendum, but a situation in which a country has disintegrated to the point where going elsewhere to seek refugee status is well and truly feasible.

It isn’t entirely clear precisely where a nameless refugee (Sophia Eleni) – itself a demonstration of the sheer powerlessness she faces in her quest for some sort of freedom from tyranny – is from, and equally, it’s not entirely clear exactly where she’s heading, partly because it would appear she doesn’t know herself. On Arriving is, presumably, deliberately trying to be as universal as it reasonably can be, because those forced out of their local communities into somewhere unknown (to them) really could well be from any number of places around the world.

To this end, politics does not come into the narrative – this isn’t the sort of production to take a sideswipe at any particular government or regime. Instead, this personal story gets understandably emotional – more poignant and melancholic than angry and resentful. There was an acceptance that so much was uncertain that there was a significant risk that this woman might not make it to the other side, wherever and whatever the other side was. It is rather harrowing that even a sea crossing so rough that water started entering the vessel wasn’t going to faze her too much: it was still preferable to be there than to remain at home.

If anything, it’s a gripping story, filled with plenty of details. Eleni’s engaging manner, too, helped with character development. By the end (which, as you can imagine, wasn’t really the end for the character, but whether it was a new beginning or a continuation of what the play started with would be giving too much away) there’s the feeling that the audience knows the person for who she is – what her family members are like, how she copes with challenging circumstances, and her decision-making processes, amongst other things.

Occasionally the incidental music is a tad excessive, but some other sound effects are decent and effective, such as the sound of children in excited conversation in some sort of refugee holding facility (where they must wait while their applications are being processed) – for them, as our narrator points out, they see toys and other children, and that seems enough to keep them relatively happy.

I may not have agreed with all of the narrator’s views, but it is not difficult to understand what they are. The experiences recalled in this production are indicative of the many dangers people displaced from their communities face, but also demonstrate acts of kindness humans are capable of when supporting one another through their respective journeys. The script defies convention by not including copious moments of comic relief from the bleak and risky story, but the character’s hopes and aspirations for the future prevent it from being overly dark and dreary. An intriguing production, delivered at a steady pace, and with much food for thought.

On Arriving is a new one-woman play, exploring a young refugee’s fight for survival, as her country falls apart before her eyes.

We are transported back and forth through memories as she shares her journey; from the familiarity of joking with friends and navigating young love, to what it means to lose loved ones and what we call home.

Presented through a non-linear structure – reflecting the way we recall memories – this brave, poetic play looks at the human moments of one person’s choice to leave a place they have known their entire life, to set off for something unknown.

Sophia Eleni performs with deep, personal connection to the story of home and war, her own family having been made refugees when fleeing Cyprus in 1974 after the Turkish invasion.

It is written by Ivan Faute, an award-winning playwright from the US, who has worked with Bosnian refugees in America and minority students in Vietnam, where he lived for several years.