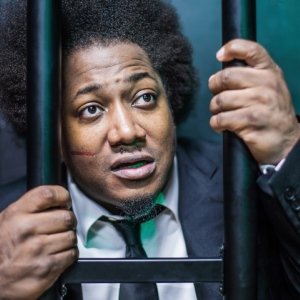 Red Peter (directed by Chris Yun-Ward) is the stage adaptation of the 1917 novel “A Report to an Academy” by Franz Kafka. If you are familiar with some of the Bohemian novelist’s work, you will know that a certain level of absurdity and weirdness is always present, and this story is not different. Red Peter is the name given to an ape that decided to become a human to escape life in a cage in a zoo and is now invited by an academy to give a speech on his transformation.

Red Peter (played by Denzil Barnes) enters the stage carrying a briefcase, dressed in a dark suit and a crumpled white shirt, and thanks the academy for the opportunity to tell his story. He was captured in Ghana by a group of European hunters, put in a tiny cage and loaded onto a steamer back to Europe. The crossing to Europe is very challenging for Red Peter, closed in a minuscule cage without a way out, surrounded by humans teasing and mocking him. He tries to imitate some of his captors’ habits, but finds some of them particularly challenging, like drinking alcohol. Once Peter reaches Europe, he understands that there are only two options for him: spending his life in a cage in a zoo or learning to be a human to have a way out. He has a few trainers and manages to master human language and behaviour, not because he wants freedom, a totally human concept, but just because he wants to be far away from cages.

The first ten minutes of the play are a bit too weird for my taste, the show is rather slow to start and there is a bit too much philosophical discussion on the meaning of being human which I felt was unnecessary and not in line with the ape’s character as it is defined in the rest of the performance.

However, it is worth persevering, because the rest of the play is completely another level. As soon as Peter starts to tell his story, from the capture onward, the show comes to life and the talent of Barnes explodes on the stage. Using just a lectern, you can feel on your skin Peter’s desperation at being trapped in a small cage, the pain while attempting to find a way out. I felt claustrophobic just listening to the story.

The attention then shifts to Peter’s desperate attempts to emulate men’s behaviour because he understands being a man is the only way out of the cage. The ape struggles to make sense of some behaviour, like drinking alcohol, but his desire to be accepted is overwhelming and manages to master even the most absurd (by his point of view) habits. Barnes really manages to distillate the essence of being a human-ape, both in the way he speaks and in the way he moves, with sudden outbursts of screams, hoots, jumps and a particular way to walk on two legs. Barnes takes the audience into the story and I have rarely felt so many sensations on my skin as during this performance.

Personally, I would streamline the beginning of the story, making it less hard to digest and develop more in-depth the last part of the storytelling as the section on the training to become human is mostly skipped, but I am not Kafka and I am sure other people will love it just as it is. However, I really enjoyed the main part of the play and think it is a very powerful reflection on what really means being human, through the eyes of another species.

A stage adaptation of the short story “A Report to An Academy” by Franz Kafka.
An African ape has been captured in the jungles of West Africa and brought back to ‘civilisation’ by his European captors. To escape a life of incarceration, he ‘evolves’ into a human being. Red Peter mimics human habits from the crew of the ship upon which he is imprisoned, masters human speech and eventually decides to embrace human society rather than languish in a zoo as an ape.

Grid Theatre is a multicultural theatre production company based in South London whose members have professional experience as performers, directors, choreographers and drama teachers in both Korea and the UK. One of Grid’s central aims is to explore a variety of theatrical forms from diverse cultures within its performances.