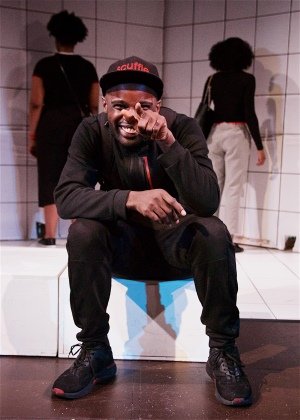 This is a powerful, invigorating, seismic, and ultimately chillingly disturbing show brought to life through performances by a quartet of on-the-money-actors supported by a high-quality creative team.

Conceived by Urban Wolf, who also performs, in collaboration with writer Tom Wainwright, Custody is a tour de force about a tour of the force, the Police Force, that is and its shadier, dodgier, bottom-rung enterprise that appears to have afflicted black communities for generations. Don’t get me wrong, here, I’m not about to condemn all cops and tar them with the same brush. There are brilliant officers out there, there are hard-working people who have all kinds of shit thrown at them day in day out and many of them – and I like to think most of them – do a great job under all sorts of pressures. But this play explores the minority, the persistent minority, that whatever investigations and independent inquiries and sunlight post mortems are held, whatever measures are put in place, then we still have a gung-ho, power-lusting and, yes, sometimes a racially motivated mentality that sees young black males incarcerated in police cells for minor offences and sometimes no offence at all, never to see the light of day again. It’s a scandal. And Custody shows exactly why it’s a scandal. And the Ovalhouse is one stop up the line from Stockwell.

Cleverly we don’t see actual police officers portrayed on stage other than in reported speech, out of shot figures and blue flashing lights effectively utilised at the pinch-points of the script. This is because the show is as much concerned with the terrible debilitating effect such a shocking event as a death in custody has on families, how it pulls them apart, how it causes resentments, how it amplifies frustrations, how the knock-on effect might manifest itself in psychological and physical problems for those that remain: this is where the writing is so good, this is real drama, this is where truth emanates from the stage.

The starting point is stop and search. Innocent Brian, young, black, a bit flash and driving a Beamer is stopped, searched, arrested: and asphyxiated. Ultimately it’s deemed an unlawful killing but the family’s joy at that verdict is short-lived as it appears there is insufficient evidence – despite graphic video of the scene – for any prosecution of officers. Now, where have I heard that before?

As Brian’s Mother, Muna Otaru, is funny and sad, knowing and naive all at the same time. Her matriarchal strictures are interspersed with genuine affection and protective love for her family. Otaru candidly gets inside the soul of a grieving parent. It’s a truly moving performance.

Ewa Dina, as Brian’s Sister, is the firebrand, the revolutionary, the wannabe Che Guevara of South London’s streets. Cut to the quick by the gratuitous demise of her brother she needs to get out and campaign to assuage her own guilt at what she feels is the wasted talent, the wasted life, the wasted love.

It’s a muscular, in-your-face performance by Dina which shreds our emotions and tugs violently at our heartstrings, particularly when, continually knocked-back and beaten up by the system, she has to succumb and give up her crusade for justice.

Brian’s Lover is played with spine-tingling intensity by Rochelle James. Left rudderless, directionless and bereft by the horror of an inexplicable bereavement, her only escape is escape and a new life, a different life.
James shows us the dichotomy of grief in full relief as she wrestles with her soul trying to find some peace in a new partner and a baby. But she returns to the fold for the two-year anniversary memorial of Brian’s death and we see in her eyes that the pain has never really gone away and is never likely to.

And as the Brother, Urban Wolf brings to the stage a rarely seen intensity and stiletto-like perception. Wolf downplays it all at the start as he builds a world of love and hate, peace and war, calm and rage and ultimately respect in the face of police brutality. It seems to me that, far from judging, Wolf as performer and creator, is presenting the facts, is dealing in veracity, is prodding us – yes, at times, quite violently – into asking “why?” and imploring us to keep asking “why?” Wolf’s performance is ingrained with honesty and candour and is lit by anger.

Designer Fran Horler has come up with an ingenious set for the show with a starting point of street tributes in front of the starkness of brick walls. These open up smoothly to discover a kitchen and the sanitised spaces of hospital and police cells. Horler is ably supported by Will Burgher’s lighting design which is subtly effective in creating the atmosphere of different locations, time-scales and dream sequences. These last are expertly choreographed by Sara Dos Santos with the four members of the cast all contributing to the feeling of disjointed ambiguity that these sequences create. There’s some excellent sound by Michael Francis though it could come down a notch when it’s over voices.

In the end, Custody asks what it will take to end deaths in the cells. It’s a production that, I believe, the Mayor of London, Sadiq Khan, should see, as should Home Secretary Sajid Javid. Most of all, Cressida Dick would do well to make time to come down to the Ovalhouse and sit in the audience and drink this in. Only good could come of it.

When a young black man, Brian, dies in police custody, it sends shock waves across the community. Reeling from his death, Brian’s family struggle to make sense of their loss, whilst pursuing a lengthy court battle to find justice. Inspired by creator Urban Wolf’s own experiences with the police, this stark and timely play explores how young black men are slipping through the cracks in society.