Having fairly recently seen a play about Tony Benn, it was interesting to observe this play about Margaret Thatcher – the other side, as it were, politically speaking. The pre-show for Handbagged had started when I was still in the conveniences, when the Toys R Us Christmas 1989 advert could be heard throughout the theatre’s speakers: “There’s a magical place, we’re on our way there / With toys in their millions all under one roof…”. The Eighties theme carried on and on before the lights went down for the show proper, the audience being treated (or subjected, dependent on one’s viewpoint) to music videos from the likes of Simple Minds and Cyndi Lauper.

Video clips from the time period from 4th May 1979 to 28th November 1990 continued to appear during scene changes. The focus was, fundamentally, on the weekly meetings that Thatcher (Jane Marcus) had with HM The Queen (Tracy Frankson) during her tenure in Downing Street. As you know, the discussions that take place in these meetings are kept confidential. The play, then, is able to take as much theatrical licence as it wishes, with the audience neither more or less knowledgeable than anyone else as to whether specific details were actually said or even implied. But ‘T’ and ‘Q’ (as they are listed in the programme), and their younger selves, ‘Mags’ (Helen Geldert) and ‘Liz’ (Heather Stockwell) between them raise so many objections that “I didn’t say that!” becomes over-used, a punchline that wears so thin I wanted to shout back, “No, no, no!” back at them.

No production of this kind is going to attempt to cover all of the events in Thatcher’s premiership in the 2 hours 20 minutes running time, despite the protestations of Actor 1 (Lizzie Lattimore), who isn’t happy about events such as the Greenham Common protests and the miners strike not being discussed in detail. For the uninitiated, or even those like me who would be interested in a reminder, eleven pages of the show’s programme are dedicated to what went on, irrespective of whether the stories were covered in the show itself. 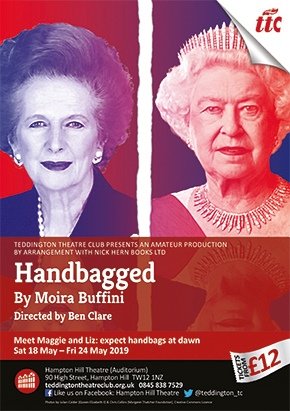 Neither of the Queens quite manage to maintain the actual Queen’s 1930s clipped diction throughout, and some opening night nerves crept in resulting in some negligible stumbles in the dialogue, which will no doubt be ironed out as the run progresses. Some of the mannerisms seemed exaggerated for comic effect. Indeed, an appropriately stilted sense of humour runs through the narrative – particularly noteworthy was an observation that as Arthur Scargill (Jim Trimmer, who also played a wide variety of characters, including Sir Denis Thatcher, Lord Heseltine, Lord Carrington, Ronald Reagan and Gerry Adams) was as obstinate as Thatcher, they were (in that regard, at least) remarkably similar. The other punchline I rather liked was one about Section 28 – to explain it would be to breach it (not quite true, of course, as nobody in the play was acting in the role of a ‘local authority’, but I found it amusing nonetheless).

Lattimore, too, takes on a variety of roles, including Lord Kinnock, Nancy Reagan, and – surprisingly convincingly – Kenneth Kaunda, President of Zambia 1964-1991. The set seemed designed, in part, to minimise the amount of work required to carry out scene changes: stage left was a meeting room at Buckingham Palace, while stage right had a raised platform, reached by climbing up a short flight of stairs, and serving variously as a plane and a waiting area amongst other things.

There’s a certain mischievousness in this production, which, granted, isn’t for everyone. Although heavily reliant on description (‘show don’t tell’ is for other shows, it would seem), this is a whimsical and entertaining piece of theatre.

Handbags, hairspray and sensible shoes. Meet Liz and Maggie. Two enduring icons born in the same year. One destined to rule, the other elected to lead. You are invited to listen in on their weekly private meetings. What follows is a mostly true story. 40 years to the day since Thatcher entered No 10 as Prime Minister, this West End hit is a deliciously prescient, brilliantly funny and poignant look at two giants of the 20th century.

HANDBAGGED
By Moira Buffini
Directed by Ben Clare
Sat 18 May – Fri 24 May 2019
http://www.hamptonhilltheatre.org.uk/