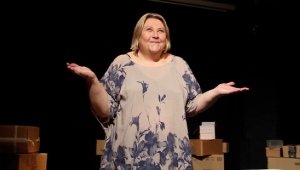 Categories, or ‘boxes’ can have their uses – this very production, Little Boxes, is classified by the Vault Festival, of which it is a part, as ‘theatre’. Other categories include ‘comedy’, ‘dance and physical theatre’, ‘musicals and gig theatre’ and ‘spoken word and poetry’. But is it right to treat people in a similar way to a catalogue of live performances? Joann Condon, perhaps best known for playing Fat Pat, a member of the Fat Fighters in the BBC Television comedy series Little Britain, asserts there is more harm done than good in putting people into – well, little boxes – saying that people are this, that or some other thing.

The material presented is sometimes achingly funny, resulting in uproarious laughter from the audience on occasion. Above all, though, it is incredibly thoughtful and frank. The irony is not, ultimately, lost on Condon when she calls herself a “fat woman”, itself arguably a ‘box’ or category which invites various assumptions. But Condon is aware of these, and goes as far as recounting some of them to good effect. Her stories are taken from her career in the entertainment industry, and in some ways are nothing new, in that they are commensurate with other anecdotes from fellow actors who have also been asked to do quite ridiculous things (and have firmly but politely refused to do so). I hold myself back from giving examples – that would be giving too much away.

Ignoring the adage to not mix business with pleasure, or rather one’s personal and professional lives, Condon is as happy to talk about her home life as well as what happened on stage or in front of a camera. There’s something quite profound in her taking out a container the size of a matchbox and calling it the ‘me box’ (the stage, despite the show’s title, is adorned with boxes of miscellaneous sizes). I have been told by actors that they are encouraged to push themselves, such that they can suffer burnout (amongst other things) – though notably for Condon, exhaustion seems to result more than anything from the challenges of parenthood.

And yet, the laughs still come, with Condon’s East End charm proving to be rather disarming. The devil is in the detail, such as the (unsurprisingly unpleasant) experience of sitting on seats designed for children during parents’ evening. The usual high level of audience engagement in a single performer show, achieved by directly addressing the audience, is supplemented here by quick reactions to audience responses, as well as a momentary supporting role for one ‘lucky’ audience member – as ever, sit in the front rows at one’s own risk.

The staging is fairly simple: the production relies on the good old-fashioned art of storytelling, and Condon’s comic timing is impeccable throughout the (admittedly brief) performance. The show’s brevity isn’t a problem here – the story is told at a steady pace and is never rushed. The ending is positive and hopeful, and while the imponderables and difficulties of life are never skirted around, there’s much food for thought in this heartfelt and humorous piece of theatre.

“Don’t stack me away in little boxes to collect dust!”
Laugh and cry as Joann Condon (Little Britain, Dad’s Army: The Lost Episodes, The Office, Edge of Heaven, Cradle to Grave) presents Little Boxes. “My new one-woman show lifts the lid on all the little boxes that are created for us: Mum, woman, actor, writer, comic, cook, cleaner… who am I… and who are you… really?

Have you ever felt that you have been unfairly categorised, pigeon-holed, “boxed-up”? You want to scream, “That’s not me! You don’t know me!” It happens to all of us; friends, family and people you’ve just met put you in a box and keep you there. And yes, we do it to ourselves and to other people.
Well, actress and comedian Joann, has had enough. “Just because we look a certain, way and speak a certain way, and are of a certain age, people make snap decisions about who we are.” Follow Joann on her journey of discovery, as she sorts through the boxes she has accumulated during her life.