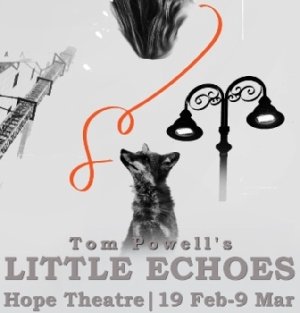 A painful and difficult work from an emerging writer with a growing reputation, given its first outing. Three contemporary Londoners, each touched by evil. Three narratives woven together, slowly building in an escalation of horror that unfolds over 90 minutes.

Like most 16-year olds, Danielle (Maisie Preston) knows it all, unlike her frankly embarrassing parents. She finds her way into the VIP area of a pop concert via a borrowed credit card and discovers a hitherto unsuspected gift for music. She is thrilled to be picked out by the well-known star. At first, she is happy to pay the cost, but as the price mounts, the Faustian deal threatens to consume her.

June (the excellent Ciara Pouncet) is a cool and composed 21st Century fixer, a relationship manager in the jargon of the day, always on call for her ever more demanding boss. But what is her job? Does anyone know? Does she know?

Shaj (Mikhael DeVille) is the sane one, grounded and sensible when his life his wrecked by a seemingly motiveless acid attack on his young brother. Devastated by grief and guilt he seeks revenge, and chases around the city in a series of intuitive and increasingly surreal leaps, his path crossing and re-crossing with that of Danielle, coincidence or destiny?

The stories are told as a trio of interweaving first-person monologues, with a rich supporting cast of characters, played by the company themselves. Jessica Staton’s stark set, a brutal and jagged symphony of black and white, illustrates alienation in the crowded metropolis. Chris McDonnell’s use of handheld filament lamps and microphones is particularly effective, all underpinned by the subtle dissonance of David Denyer’s soundscape.

The three narratives weave around each other as the bonds of doom bind. Danielle is drawn into increasingly desperate acts. Shaj becomes deranged, his search for the aggressor becomes an obsessive psychosis as he slips beyond the bounds of reality. June is drawn, apparently unwillingly, across the line from immorality to illegality.

A fascinating and original form of storytelling, and a brave attempt at something wonderful with an excellent and well-drilled cast, but one that fails to hit the mark, and, as credibility wavers, it feels as if the play has been brought to the stage prematurely.

The absence of dialogue, the use of disembodied voices, the apparent disconnect between the three narrative streams, the juxtaposition of absurdity and gritty reality don’t mix well. The supporting characters become increasingly stereotypical; the pop star is an underdeveloped mash-up of four of five quite different male villains; artist overcome by hubris though to cult leader to seedy flesh peddler.

The conflation of the stories occurs in the final third of the play and feels forced. Powell has created a compelling contemporary milieu, but maybe the three tragedies would have better developed as a trilogy. All concerned are to be congratulated for a well-executed and thoughtful performance of this challenging new work.

Shajenthran’s brother has had acid thrown in his face and Shaj is out for revenge. Danielle’s teenage crush on a pop idol develops into an illicit relationship, ‘professional mentoring’ becoming something much darker. June has spent twenty years serving the private needs of the super wealthy, but her new assignments confront her with the questions she’s spent a lifetime running from.

When their paths cross it is not something any of them will forget. Filled with love, coercion, loneliness and obsession, Little Echoes takes you through the city as you’ve never seen it before. A city of deep shadows, darker intentions, and where anything can change in the night…