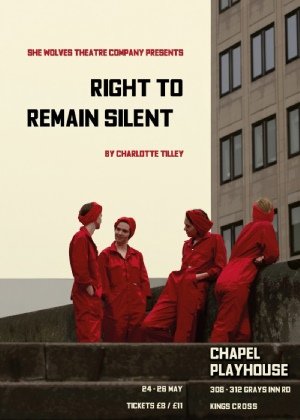 Interminable, monotonous drumming pre-show, some old, tatty furniture, four women in bright red overalls, an oppressive, heavy-handed, jack-booted style State, over-use of badly balanced narrative sound fx and, you’ve guessed it, a play set in the future: i.e. Right To Remain Silent has all the hallmarks of an average A-Level devised piece which, unfortunately, never rises above that level. We have some decent performers here but they are obliged to struggle gamely against a vacuous script, a disjointed narrative and a plot with so many holes it wouldn’t go amiss on a Swiss Cheese counter.

The play is set in 2070 after the “Women’s Civil War”: 4 women have escaped from the “behaviour control” camps where all women are raised and medicated. Eat your heart out Jess Phillips and co – once you’ve gone there will be no more strong women, apparently. The four get to a safe house in a desolate London street intent on joining the “riots”: cue lots of shrieking, shouting, squealing and fist-pumps.

Its a “simple premise” the programme tells us. Yes. Simple and dotty. Writer Charlotte Anne Tilley’s vision of the future includes baked bean cans without labels, tampons that are unpackaged, radios from the ark and a complete absence of mobile ’phones. Social media, the cornerstone of any self-respecting uprising in the modern world, has disappeared without trace with no apparent successor. Tilley gives us no clue as to why any of this should be so – instead, we are left floundering, trying to piece together a jigsaw in which none of the pieces fit. It’s a kind of Hunger Games of Thrones mash-up – sans teeth, sans voice, sans reason and sans dragons.

This is disappointing as I saw She Wolves Theatre Company’s inaugural and very impressive outing with The Regina Monologues. On that occasion, Jenny Wafer and Rebecca Russell’s witty and intelligent script with its high-paced narrative and definitive characterisation challenged the cast and brought out the best in them. Four of the six performers take roles in this, the company’s second show: and frankly they are left floundering in a haze of clichés-to-go.

As Susan, Megan Morvan tries her best to make sense of the lines whilst Nomi Bailey as Annie injects a little humour through her expressions and reactions. Molly Marr-Johnson attempts to extract some meaning from the text and in Rosa, Emily Brown shows us how to be completely natural on stage during the opening sequences.

Unfortunately, Rosa is struck down with medication withdrawal symptoms and we lose her knowing spontaneity in the second half. It’s harsh to say it but these actors’ talents are wasted on this script and I think She Wolves need to look carefully at how they approach their next venture.

One of the most excruciating moments is when letters arrive, at this secret (!) address, from Rosa’s Mother who was presumed dead. These are inexplicably kept from Rosa until she recovers and we then have all four characters solemnly reading one of the letters – silently to themselves! – one after another. In my view, this is taking “ Right To Remain Silent” to unnecessary extremes. (Having said that there was no other obvious reason that connected the title to the play.) Writer Tilley, who also directs, perhaps needs reminding that it’s theatre, there’s an audience, and we need to know what has been written – not just sit and watch several minutes of silent reading accompanied by heavy sighs and tortured expressions. Shakespeare might be a good example to follow here: he got characters to read letters out loud! And in a show where fx does a lot of heavy lifting there’s always voice-over.

My advice to the company – and to writer Tilley – would be to get back to basics. There are no substitutes for plot, character, developing narrative and plausibility. Energy and vitality by the cast – which this lot have in spades – cannot carry a show by themselves: they become inconsequential if we don’t buy into the story and believe in the characters.

Four female inmates escape from their government-run behavioural reform camp to join the chaos and violence of the city protests. As time goes on the young women begin to question the price of rebellion and whether the human race can ever really change.