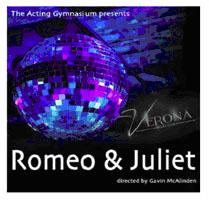 This production brings Romeo and Juliet, the archetypal lovers from Verona, 1597, bang up to date in Camden, 2015, by the means of music, Converse trainers and a mostly youthful cast. Shakespeare’s words may have been written in an Elizabethan England when the previously time-honoured custom of arranged marriage was a hot, controversial topic but the central issue of this play, attempts by some families to control the desires and reproductive power of their young, remains a living and painful issue in England and Europe as well as in other parts of the world.

Music, virtually all of which dates from about the last twenty years, rather than poetry, drives the rhythm of this production with fast snatches describing scene breaks as well as providing a structure for choreographed love. The party where Romeo and Juliet make their connection becomes a Club, providing a charming scene in which only they move in enraptured rapport, the rest of the dancers having turned to statues. This was lovely direction, Shakespeare’s language here fitting perfectly with this interpretation to which appropriate gestures were also matched. The choreography by Charlotte Campbell has moments of brilliance.

The impression is successfully given that we may be watching two contemporary university students falling for one another. That Juliet is not wearing feminine, best clothes as they do but a sweatshirt with jogging bottoms, does not diminish but rather elevates the suggested desire from the superficial to the essential, a connected appreciation of what is unique in another.

Friar Lawrence, played by Martin Balanow, is presented as a hippy, in a wonderfully amusing scene of introduction which makes his role in what comes next make perfect narrative sense.

Peter Jerome, Romeo, has a rare connection with Shakespeare’s text. Even short lines such as, “She speaks,” were given a sense of curiosity and wonder while he makes delightfully clear the meaning of lines, lost in other, high profile productions. Jane Feldberg, as Juliet, communicates with grace the naivety of a girl’s first romantic longings.

Talha Pirzada, playing Mercutio, and Manish Srivastava as Tybalt have a terrific fight, menacing and believable, difficult to achieve given their proximity to the audience.

Michael Claff as Capulet, Juliet’s father, is powerful in his role as a father and husband who shifts from bonhomie to cruelty in a flash.

Mazin Shawish plays Paris as an attractive character, who Juliet may have fallen for, if only she had met him first. When he dies in the final scene because of Juliet it is poignant that, while in death Romeo and Juliet are both entwined and mourned by their families, Paris lies in the same tomb alone, yet another victim of the expectations of the society they shared.

There is the impression that this play has been directed with much reflection by Gavin McAlinden. The first part of the play, is made the most of, enjoyable, paced and lively. The more difficult second part, has been cut so it does not dwell and linger too long. Any limitations of the production are due in part to being performed in a space in which it is tricky to communicate atmosphere with a low production value. However, this is most certainly a lively, fresh take on a popular classic.

Welcome to club Verona!
Think nightclubs Think decadence. Set in modern club culture, we’ve put together a phenomenal new take on one of the greatest love stories ever told.

There are usually, broadly speaking, two large demographics of patrons at a family show like The Wizard of Oz – children and their responsible … END_OF_DOCUMENT_TOKEN_TO_BE_REPLACED

This production makes excellent use of the available stage space - and, rather like the big musicals at Chichester Festival Theatre, has its cast … END_OF_DOCUMENT_TOKEN_TO_BE_REPLACED

This is an enjoyable and dynamic production of Henry V at the Sam Wanamaker Playhouse. Does it matter that there is innovative action and that it is … END_OF_DOCUMENT_TOKEN_TO_BE_REPLACED

With so many versions of A Christmas Carol doing the rounds (well, it is that time of year), it takes something pretty substantial to stand out from … END_OF_DOCUMENT_TOKEN_TO_BE_REPLACED