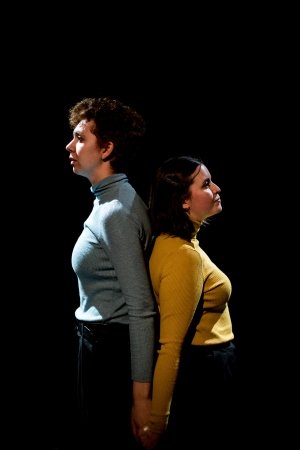 In Shades of Mediocrity, friends Maeve Campbell and Lily Levinson talk about their shared love of Paul Simon and Art Garfunkel. Not just their back catalogue of songs, but various interviews, including a 1983 appearance on Late Night with David Letterman on US television, as well as a rather hilarious induction into the Rock and Roll Hall of Fame. The divisions that had run deep between them continued even in public: Garfunkel praised Simon’s creative abilities, saying he was “the person who most enriched my life by putting these songs through me”. Let’s just say the compliment wasn’t exactly returned with an equal effusive commendation: “Arthur and I agree about almost nothing.”

For Campbell (tall with curly hair) and Levinson (shorter with dark hair), the comparisons they run between themselves and their folk music idols extend far beyond resembling Simon & Garfunkel in the broadest terms. By their own admission, their own disagreements sometimes spilled over into affecting the effectiveness of their collaborative efforts. And then there’s the key distinction: women, they assert, are not brought up in the same way as men and are not encouraged to display confidence and tenaciousness. (I’m not sure every woman would agree with that, but there we have it.)

The show’s title is derived from a lyric in Simon & Garfunkel’s ‘Homeward Bound’, a song which appears on their 1966 album ‘Parsley, Sage, Rosemary and Thyme’. “Tonight I’ll sing my songs again / I’ll play the game and pretend / But all my words come back to me / In shades of mediocrity / Like emptiness in harmony / I need someone to comfort me.” As far as the production is concerned, the phrase is only used as an assessment of what their attempts to emulate the success of Simon & Garfunkel (yep, seriously) are in danger of becoming.

There is some amusement in watching them not quite juggle to the same standard as their favourite singers. ‘Close but not quite there’ seemed to be a running theme throughout the performance, in which some lip-synching with what Simon & Garfunkel became impossible to nail down totally, thanks to some (perhaps deliberate) significant sound distortion on the recording being played at the performance I attended. Their frustrations, as well as their ambitions, are understandable, though they have probably gone further than most to try to realise their dreams.

Not every punchline landed well with everyone in the audience. Nothing, at least to my mind, was remotely offensive. But there were certain gags that were unfunny, even if they were easy to comprehend. The production does, at least, avoid doing that thing of filling time by launching into a medley of Simon & Garfunkel tunes at the end, with the narrative continuing right up to the final moment. But one isn’t going to learn anything new about Simon & Garfunkel, or at least not anything easily looked up, such that the most intriguing moments are about Campbell and Levinson themselves.

Considering it’s a debut production, however, it’s far from a train smash. Both actors enjoyed a good rapport with the audience. Rightly or wrongly, I got the feeling there’s more that connects this pair than a mutual love of ‘The Sound of Silence’ and ‘Mrs. Robinson’ (and so on), and the show would have benefited from enlarging its scope to cover some of these other aspects to demonstrate the complexity of the bonds of long-term friendships.

Shades of Mediocrity is a ‘sparkling and provocative’, ‘superbly funny’ new show about friendship, artistic angst and niche musical fandom.

Lily and Maeve are well on their way to becoming just like their idols, Simon & Garfunkel. Admittedly, they’re not American, they’re not men and they’re not musical geniuses. But they’re not going to let a few technicalities get in the way of their dreams.

Inspired by music documentaries, Stars in their Eyes, Comic Sans and polo-neck jumpers, Good Friends Lily and Maeve lip-sync, dance and juggle their way through this riotous examination of fame and failure.

Shades of Mediocrity has been supported by Theatre Deli, Camden People’s Theatre, and Birkbeck Centre for Contemporary Theatre.