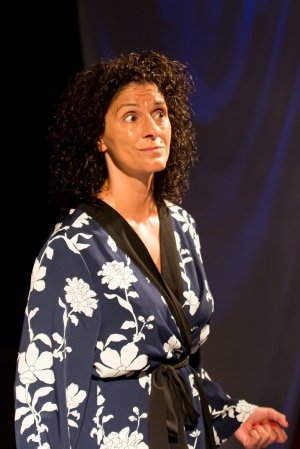 Subtlety and nuance. No, not a firm of solicitors, but two essentials, in my view, when the subject, on stage, is erotica. Extreme erotica.

The Censor begins promisingly as it, quite cleverly, lays out the parameters for a debate about censorship in film. Ten minutes in though, the play truly jumps the shark as the “female pornographer”, in attempting to persuade a lowly member of the censor’s office to give her hardcore porno-flick a certificate, slides her hand inside his flies and grabs his genitals. It’s as if the writer suddenly remembers he’s got to keep up his titillation quotient. We then run the gamut, albeit at appropriate intervals, of in-yer-face sexual activities of the increasingly weird kind as playwright Anthony Neilson attempts to persuade us that sex without feelings is, well, sex without feelings. We should be grateful, I suppose, that the production utilises an “Intimacy Coordinator” (Kate Lush). Or not. Incidentally, I use the term “in-yer-face” advisedly as it is often used to describe Neilson’s work though he dislikes the term, preferring “experimental theatre”. Well, believe me, this is ultimate in-yer-face theatre and there is absolutely nothing experimental about it: subtlety and nuance there are none.

Which is a shame as Suzy Whitefield, as the pornographer Miss Fontaine, is a superb actor who demonstrates that she is more than capable of expressing seductive sexual allure without having to resort to the hands-on, full-thrust, grab-fest that director Imogen Beech demands of her. There’s more than enough in Whitefield’s performance to show us that she gets nuance and understands subtlety but every time we think she might be on the verge of developing real emotion and intimacy in the character she grabs another part of The Censor’s anatomy or throws him on the floor and whips off her knickers. As for his part, the Censor (Jonathan McGarrity) is played, completely unconvincingly, as “little boy lost” throughout. It’s a completely unrealistic character and surely needs some self-parody and irony to make it work. As it stands we look at the character and think: “What a knob”. I don’t think that was Neilson’s intention.

Chandrika Chevli has the unenviable task of playing the third character (The Wife) in what is essentially a two-hander. She has to turn up every now and then and say to her censor husband “David wants to talk to you”. Turns out he wants to talk about feelings.

The play was first seen at The Finborough twenty-two years ago and, frankly, it hasn’t aged well. I imagine that Last Exit To Brooklyn was required research reading for Neilson when he wrote it, a seminal work with the ability
to shock. The Censor doesn’t shock; it doesn’t embarrass; it doesn’t tell us anything new. It’s disappointing that RoundPeg Theatre hasn’t framed the production against the contemporary backdrop of the #MeToo movement particularly as the roots of that are in the film industry. Instead we have full-frontal pseudo-erotica and if crapping on the floor (spoiler alert) in the cause of sexual gratification is your bag then go and see it. Otherwise, if you’re looking for entertainment I would try something else.

But the war she’s fighting is about far more than just one film. She dreams of a day when films like hers can be shown in every multiplex in the land, to every man, woman and child. When that day comes, there’ll be no more repression, no more witch-hunts. It’ll be a world absolutely without guilt or shame.