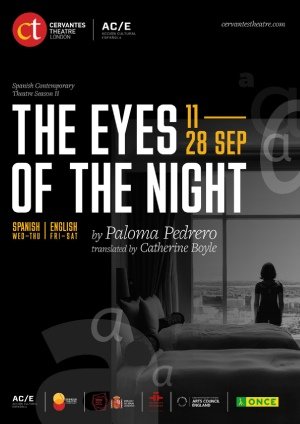 Set entirely in a hotel room, and therefore a neutral venue to both parties, Lucia (Lanna Joffrey) and Angel (Samuel Brewer) meet and talk. Lucia needs to clear the air somewhat – her marriage is going through a rough time, to the point where she dreads the weekend because her high-flying corporate career ceases to be a distraction from the drudgery of domestic life. Why and how she ended up with Angel in this room isn’t entirely clear (at least not to me), but there are widely differing expectations of what Angel is being paid cash in hand for.

Angel, a man with a visual impairment significant enough to justify the use of a cane, is far from ‘woke’ – had he been an employee at Lucia’s workplace it wouldn’t have been long before he would be compelled to attend ‘equality and diversity training’. Then again, both characters’ actions could be construed as aggressive and unpleasant – and if Angel’s treatment of Lucia is downright misogynistic in places, the play seems to put forward the idea that a physical disability does not prevent a man from being as overpowering in his assertiveness as his able-bodied counterparts.

Unusually, an entire scene is set in near total darkness, as Angel wants Lucia to experience what the world is like from his perspective. The production, perhaps wisely, leaves it to members of the audience to determine whether the literal lack of vision is a metaphor for not being able to see the proverbial wood for the trees in other aspects of the characters’ lives. This is very much a first-time meeting, and the play captures the awkwardness of people who are still unfamiliar with one another with displays of verbal self-defence.

Brewer, himself a person with visual impairment, remarked afterwards at a press night post-show discussion that he welcomed playing Angel because it showcased his acting talents without him being pigeonholed into playing “a sage”. In a two-hander production where both characters aren’t very likeable, it’s extraordinary that interest in the story is maintained throughout. At least part of its engaging nature arises from a deliberately uncomfortable atmosphere created by (amongst other things) an invasion of personal space, and Angel’s inability to get possible sexual relations with Lucia out of his thinking.

Having tried to end the evening early by ordering Angel to take his agreed fee and leave, Lucia finds herself continuing their conversation after he simply refuses. For all his bravado, however, she finds a way of getting back at him that knocks him for six, to the point where she becomes concerned for him. The fight for control goes on – both parties must exercise caution that they do not pursue victory at the expense of being able to continue to demonstrate a full range of human emotion, including empathy and tenderness. Paloma Pedrero’s script, however, puts the emphasis on Lucia to maintain a healthy balance. It’s not that Angel is written off as a lost cause, but the stakes would appear to be lower for him, without such heavy work and home life pressures and strains.

This intriguing exploration of two very different but incredibly convincing characters is well-paced, with pauses perfectly timed – never so long that one’s mind begins to wander away from the story being played out on stage. It’s not always a pleasant watch – it can even be a tad exhausting – but the dynamics and powerplay are well worth seeing.

After a successful dramatised reading last year as part of the Contemporary Spanish Playwriting Season I at the Cervantes Theatre, The Eyes of the Night, a play written by one of the most important playwrights of her generation, Paloma Pedrero, sees its UK premiere in September. The Eyes of the Night is a complex and beautiful play that reveals the deepest desires and fears of a middle age business woman who, with the help of a blind man, will need to experience the darkness in order to see the light.

Synopsis: Life is full of moments of change that can pop up at anytime. An unexpected encounter between a business woman, who supposedly has triumphed in life, and a blind man who she’s just met and asked to spend a few hours in a hotel with her can be the trigger for a new life. Both will have to be able to open up and let themselves experience the darkness in order to see the light…