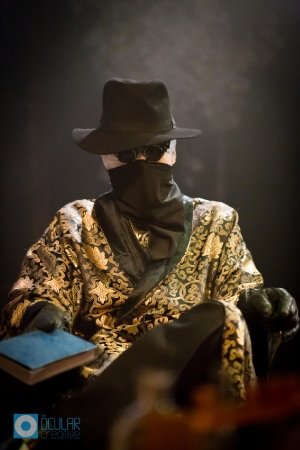 You can get overwhelmed by the amount of Christmas themed shows currently in theatreland, so it’s quite nice when a venue decides not to mount a traditional style production for their festive offering. So, it was with great pleasure I headed off to the Jack Studio Theatre for The Invisible Man.

A mysterious stranger (Shaun Chambers) has arrived in the quiet English village of Iping and taken up residence in the Coach and Horses, presided over by Mrs Hall (Matthew Parker). The stranger, whose name is Griffin, is indeed mysterious. Muffled up with a broad brimmed hat, dark glasses and a ‘kerchief covering the lower part of his face, Griffin, is impatient to have his things brought up from the station. As he explains to Mrs Hall, Griffin is an experimental investigator, and his luggage contains equipment for his work. He also emphatically tells her that he does not like to be disturbed when he is working and that he had been in an accident that left his eyes weak and sensitive. Intrigued by her guest, and slightly intimidated by his demands, Mrs Hall dispatches young Fearenside (Scott Oswold) to collect his boxes and bring them up. Now, the arrival and strange antics of Griffin, means that he instantly becomes the centre of village gossip and when a burglary occurs, in this hitherto law-abiding community, suspicion immediately falls on the incomer currently staying in the Coach and Horses.

Artistic Director Kate Bannister – who also directs The Invisible Man – has never been short of courage when programming the Jack, and this production, which uses three actors to play fourteen characters is no exception to that. Each character was very individual, and this was due to not only the acting – and more of that in a moment – but the fantastic work by Costume Designer Martin Robinson, in providing such authentic looking clothing for each person. Karl Swinyard’s set is subtle and works well, especially one of the most informative signpost ever seen on a stage.

The three actors have so much to do it’s a wonder they can keep up with it all. Not only are there numerous costume changes but, particularly in the case of Scott Oswald, there is a lot of acting that involves being manhandled by the invisible man. This involves Scott in reacting physically to things that aren’t being seen in such a way that the audience believes there is a second, invisible figure carrying out the action. And Scott really pulls this off exceptionally well. Shaun Chambers as the enigmatic Griffin is a nasty piece of work, in such sharp contrast to PC Jaffers that it would be easy to think there were two different actors playing the role rather than one very talented one. And speaking of talent, according to the programme Matthew Parker has been on a break from acting for 14 years. Well, I have to say, he is back in fine style giving us a wonderfully over the top – almost pantomime dame-esque – Mrs Hall, a beautifully bumbling vicar and, in the second act a gravitas-rich performance as Dr Kemp. I hope someone has recorded the show because, to be honest, all three actors could make a wonderful show-reel demonstrating their many talents out of it. They were having fun and their enjoyment came over the footlights to the audience in fine style.

Derek Webb’s adaptation of the H. G. Wells story works pretty well, though there were a few times when it felt like two characters were stood talking together for a relatively long period, filling in passages of the story for the audience. I’m also not entirely sure that the narrative fully explored Griffin’s character and some of the themes around his isolation from the world?

However, when all is said and done, this is a really fun-filled and highly amusing telling of The Invisible Man which in the opinion of both my companion and myself, made for an enjoyable non-traditional visit to the theatre over the Christmas period

An invisible man is a man of power.
A mysterious man arrives at the local inn of a sleepy Sussex village, wrapped in bandages and wearing a false nose. Beneath the bandages is Griffin, a scientist desperate to reverse the twisted experiment that has rendered him invisible.

This strange visitor soon sets the locals’ tongues wagging, and when a spate of baffling burglaries occur, suspicions are aroused. Before long Griffin is on the run with a trail of villagers and police in pursuit, all desperate to do the impossible – to catch an invisible man.

This fun-filled and fast-paced adaptation by Derek Webb of HG Well’s classic novel is produced by the same team behind the Offie-nominated and five star productions of The Wolves of Willoughby Chase, Kes, and Cinderella.