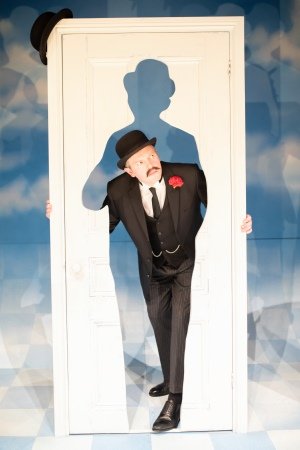 Lee Newby’s Magritte inspired set provides the ideal backdrop for James Kettle’s cleverly crafted play. The blue sky and cirrus whites are mirrored in the floor and furniture: the bowler hats are made for the character of David Tomlinson.

Tomlinson is best known for playing the upper class Mr Banks in Mary Poppins and a few other Disney films in the 60s. What isn’t well known, and what this play empathetically looks at is his strained relationship with his father, and the challenges of having an autistic son – at a time when the condition wasn’t recognised.

Miles Jupp is perfectly cast as David Tomlinson in these reminiscences of ‘family, films and fatherhood’ He brings warmth and pathos to the part, and with his comic timing has the audience in the palm of his hand. His easy going temperament allows him to accurately play a man who faced challenges with grace, albeit with the good old stiff upper lip of the times. How much of this stiff upper lip covered things up we can only guess, but what prevails is Tomlinson’s determination to break the parental mould.

It’s not a tear-jerking play – the comedy moments are too frequent for that – but nevertheless the comedy/tragedy balance is spot on. We are allowed to see the coldness of the relationship with the father (known only as FST even to the family) and the difficulties of having an autistic child, whilst being able to see the funny side. It is to the writer’s credit that the many excellent gags don’t distract from the serious points.

The one-liners are very good and are mainly ‘in’ jokes. As they are often about the characteristics of actors in the 60s, or about the theatre in general, The Life I Lead probably won’t appeal to everybody: It is an actors’ play, or at least a regular theatregoer’s play. If that is you, it is hugely enjoyable. Tonight’s audience definitely loved every minute.

As a World War Two fighter pilot, his early life contained action and adventure; but he suffered huge heartbreak with the tragic death of his first wife, and his fight to have his son Willie recognised as one of the first British cases of autism. The man who portrayed one of cinema’s most famous patriarchs was also defined by his relationship with his own father – a remote eccentric, who was hiding an extraordinary tragicomic secret.

Like The Merchant of Venice, with its profound antisemitism, and the misogynistic Taming of the … END_OF_DOCUMENT_TOKEN_TO_BE_REPLACED

After sell-out runs at Hope Mill Theatre, Manchester, and The Park Theatre, London, in 2022, Maureen … END_OF_DOCUMENT_TOKEN_TO_BE_REPLACED