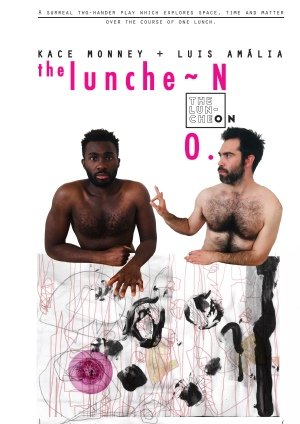 An unusual and quirky piece of theatre, one wonders, as miscellaneous props continue to fill the stage, whether The Luncheon has started or if the audience should otherwise wait patiently as a large table is steadily adorned with glasses, plates, condiments and other items. This is essentially a drama about drama, a production on stage about putting a production on stage, and for all the comings and goings, there is, at least, a demonstration of how much effort goes into putting a show together, particularly when, as the show itself points out, the cast (Kace Monney and Luis Amália) is the same as the crew, the writing team and directing team.

It’s the details that the show finds pleasure in highlighting, one way or another. When a piece of food packaging is discarded by being thrown off-stage, for instance, Monney says he’ll sort it out later, whilst Amália would rather it be disposed of properly straight away, despite the duo being under pressure for time. What the audience witnesses is the run-up to a rather intense piece of performance art, followed by the piece itself, ensuring the slow start of the show overall builds to a strong finish.

It took me a while to work out what was going on – others in the audience, who may be more used to unconventional productions of this nature, may well have cottoned on a lot sooner. Reviews of a previous run of the show were also included here, with puns and references to meals and luncheons particularly appreciated. They do read out the negatives as well as the positives, to their credit, and their responses are both indicative of the feelings one might reasonably expect and of how a production’s team justifies its creative decisions in the face of seemingly unpalatable feedback.

One comment apparently (I have no idea if the remarks were genuine or not, though there’s no reason why they wouldn’t be) suggested, if I recall correctly, that people outside the entertainment industry would not be likely to fully grasp the concepts and assertions being made – something to do with ‘in-house references’. I don’t entirely agree, and I didn’t exactly leave the theatre in a state of confusion.

That said, there were moments, I must confess, when I had no idea what on earth was happening. But there are things that can be taken away from this play – for instance, when a brief rehearsal session doesn’t quite go swimmingly, the pair decide it will be fine, confident in the knowledge they have done what they can and they will do their very best. It’s the sort of thing applicable to life more widely – no human (by definition) can be expected to be perfect. There’s also something strangely beautiful about how rough and rugged live performances can be, where the performers must keep going come what may (save, of course, things like a fire in the building). This isn’t a film set: there’s no opportunity to stop and do the same scene again.

Some wider observations about equality and diversity are interesting to listen to. The play briefly explores how far ‘diverse casting’ can go – I venture to suggest almost anything is possible these days, as I witnessed recently in another production where a non-white woman played a white male fascist. Various performance techniques are deployed in different routines, which is pleasing to see, and while this won’t be a production to everyone’s liking (though, let’s be honest, that’s true of any show), it’s a curious piece of theatre that I hope has another life beyond this very brief Clapham Fringe run.

A surreal award nominated play which explores space, time and matter over the course of one lunch.​
‘A meal’s whole ceremony in a single conversation. Just one meal. And in that meal all their previous conversations‘.

Do not come looking for answers. Here as these two humans eat lunch, you won’t find them. The duo take you on a visually dense, experimental non-linear ride & makes no attempts to make the abstract understandable.