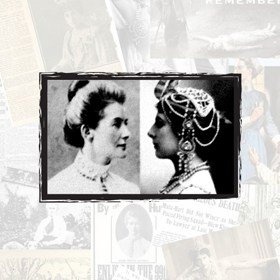 This new play, written by Martin Mulgrew, is a jewel. A four hander, one hour in length it is put on in a large room, in costume but using an expanse of floor about ten feet deep as a stage (in the front row you could touch the cast), with no scenery just cast shadows with the air conditioning set to create a chilly atmosphere (bring your coat). This production is performed by the Tower Theatre Company at The Proud Archivist, a stunning architect designed building situated on the walkway of Regents Canal, with its own bar and restaurant.

The play brings into the same space two women who were executed, almost exactly two years apart, by opposing sides in the First World War. Edith Cavell, was a British nurse belonging to the Church of England, punished for helping two hundred Allied soldiers escape from German-occupied Belgium. Margueritte Zelle, best known as Mata Hari, was a rather different character, being a European exotic dancer and courtesan, charged with spying for the Germans. One has subsequently been identified by history as a heroine and the other as a villain.

Mr Mulgrew’s play describes the women’s different responses to their similar plights, exposing character by the choices they have made. Also, the intimacy and distance of the relationship each has with their own captor in uniform, individuals who are becoming “shells of men”, as they, along with all those caught up in the theatre of war are being contained in their own form of captivity. This suits Mata Hari’s captor best, a man she describes as, seeing, “everything small.”

No word is wasted as character, images and issues connect. The dialogue is paced, poetic in its ability to capture the joys of life and devastating at times, such as when describing the intricacies of a process of execution, carried out by soldiers who would be executed themselves, should they refuse to obey the order they will be given to kill a blindfolded woman, her hands tied, at a stake. The action before us never descends to violence, preferring a tone of menace and the cruelty of truth.

Helen McCormack communicates with resonant integrity the character of Edith Cavell as a woman, driven by a desire to help her fellow human beings, taking her into dangerous territory.

Ben Belbin, as Lieutenant Bergen, works in tandem most effectively with Miss McCormack, portraying power shifts, as he reveals the complexity and pain of his own situation, a man who has found himself in the wrong time and place.

Fiona Monks has perhaps the most challenging role, to communicate in a physically confined space, the faded grandiosity and diva nature of Mata Hari. She excels in her contempt. The scene in which Miss Monks as Mata Hari describes the effect of her sexual affair with a married, high ranking officer is memorable indeed.

Ian Recordon as Captain Bouchardon is convincing in his cold, dealings. His final words in the play are chilling.

This is a production of low technical values but it is perhaps appropriate this thoughtful play dealing with the issues around the execution of these active women, almost exactly one hundred years after Edith Cavell’s death, is put on in this room, in this place, not far from the London Hospital on the Whitechapel Road, where she once trained and worked.

On Tuesday October 12th 1915, Edith Cavell was executed by a German firing squad for her role in assisting allied British and French soldiers to escape the killing fields of the First World War.

Margaretha “Margueritte” Geertruida Zelle, better known by her stage name Mata Hari, was executed by a French firing squad on the October 15th 1917, almost exactly 2 years to the day after Edith Cavell. Her alleged crime – spying for the Germans. History has branded one a saint and the other a sinner.

They are brought together on the centenary of Edith Cavell’s execution in a new play performed at The Proud Archivist in Hackney. The play explores the two women’s final hours in their respective cells being questioned by the interrogators and gives a feminine perspective on the Great War. It eschews the “brave Tommy” and “grieving wife/mother” picture of the war and looks at the war through the eyes of these two remarkable women.

Handel’s 1738 opera Serse (or Xerxes) is an exploration of power, love and human frailty. King Serse falls in love with the voice of his brother … END_OF_DOCUMENT_TOKEN_TO_BE_REPLACED

Lea Salonga has her fans. She also has some superfans, the ones who yell, “I love you Lea!” at almost every opportunity. If that wasn’t enough, there … END_OF_DOCUMENT_TOKEN_TO_BE_REPLACED

I have no hesitation in saying that the 1952 movie “Singin’ in the Rain” and its 1985 stage version is one of the greatest musicals of all time, … END_OF_DOCUMENT_TOKEN_TO_BE_REPLACED

There are, Maria Caruso was keen to emphasise in a post-show discussion, no wrong answers when it comes to responding to Metamorphosis or even … END_OF_DOCUMENT_TOKEN_TO_BE_REPLACED

Children of the Windrush generation, sisters Dawn and Marcia, grew up in the 1980s. In Roy Williams’ new play Dawn is shown struggling to care for … END_OF_DOCUMENT_TOKEN_TO_BE_REPLACED