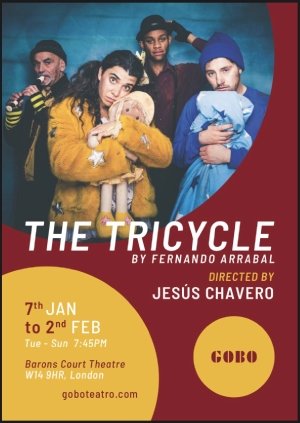 The Tricycle, originally El Triciclo, written in 1952 by Fernando Arrabal, is an absurdist take on the themes of poverty, murder and ethics, exploring the way in which personal situations can affect moral viewpoints. In the guise of a light-hearted black comedy, it holds up a mirror to society, challenging received notions and preconceptions.

None of this information is to be found in the brief programme, however. Despite the assertion that Gobo Teatro’s mission is to spread awareness of the best of Spanish theatre writing throughout England, director Jesus Chavero seems largely uninterested in explaining the text.

Instead he uses his director’s blurb to detail his own career. Maybe it is for this reason that, despite its good source material and some excellent acting, this production of the Tricycle feels hollow and unsatisfying. The absurdist fodder is all there: four characters existing in a remote state from the rest of the world, trapped in an endless “cycle” (see what he did there?) of repetition and mutual incomprehension. Climando is the archetypal clown, hiding his pain and bewilderment under a ceaseless stream of banter. Apal chooses a more physical way to remove himself from the world; spending 18 hours a day sleeping under his tatty blanket. Mita is an innocent abroad, the little girl who never grew up, joyful and petulant by turn. The Old Man is an enigma – part of the group yet not part of it, his occasional flashes of wisdom marred by an unsettling venality.

When Apal and Climando decide to commit the ultimate crime, using a willing Mita as bait, the real consequences of their disassociation become apparent. Their moral reasoning, while deeply thought out, is personal only to themselves. The forces of law and order are incomprehensible to them – literally, as it turns out. Try as they might, they are incapable of making sense of society and its rules.

Chavero, clearly working on a shoestring budget, wisely keeps the set simple and unevolved, matching the characters themselves. The action is largely tight and well-conceived, and some little quirks – such as the policeman being indicated only by a sign – work well. However, the whole production lacks a sense of humanity, and the ultimate tragedy has little or no impact as a consequence. More effective use of lighting and music would certainly have helped with this, but the main problem is with the direction of the actors themselves.

This is not to say that they don’t do their best. Ryan Yengo as Climando is a firework; he buzzes with energy and his expressive face is the perfect foil to numbed Apal, played with infectious lethargy by Tom Patrick Coley. Jerry Ezekiel has some great moments as The Old Man, and Lakshmi Khabrani is a riot as the volatile Mita.

Unfortunately, not enough of a difference is made between their moments of naturalness and their absurdist dialogue; everything is delivered in the same overly emphatic, childlike tone, which rapidly starts to grate. This lack of dramatic topography leads to gradual numbness on the part of the audience, and does a disservice to the quality of the writing.

There are definitely some good things in The Tricycle, and Gobo’s desire to promulgate the wealth of largely unknown Spanish writing is laudable. Sadly, without some serious effort and change on their part, I don’t know how successful they will be.

The Tricycle belongs to the Spanish Absurd Theatre and it is the story of three teenagers who try to survive after the Spanish Civil war by renting a tricycle to give rides to children in the park – something very common in Spain before and after the war. They are homeless, living in a park, and share the space with an old man who plays the flute.

‘The Tricycle’ is a dark fairy tale in which every character represents a section of society in the eyes of the author.

The play runs at Barons Court Theatre from 7th January to 2nd February 2020.