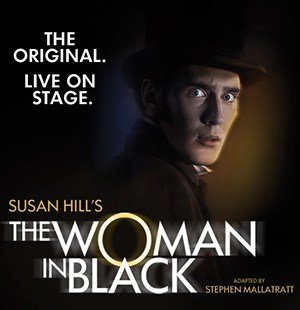 Thirty years is an incredibly long time for something to remain unchanged. Very few people will stay in the same job for such a period, it is highly unlikely you will live in the same property for three decades, and only the very best friendships can survive that length of time. So for a theatre show to continue for thirty years in pretty much exactly the same form suggests that the writers, directors, actors and other members of the production team are obviously doing something right.

Second only to The Mousetrap in the list of longest running West End shows of all time, The Woman in Black has been at the Fortune Theatre since August 1989 and this year embarked on its latest tour (numbers of which are well into double figure as well). It is also currently on the curriculum for GCSE Drama and as an option for GCSE English Literature, so to say it is well known is quite an understatement. That of course adds pressure to this particular iteration and its cast and creatives, but safe to say they haven’t let that get to them.

The show opened with the stage looking more dated, adapted into an Edwardian-esque style theatre for the play’s early 1900s setting. This changed slightly throughout the performance, the two actors expertly rearranging the limited furniture enabling the set to become the various other main locations in the piece (including the main house, the local pub and even pony traps and train carriages) with support of outstanding lighting and sound – it was always easy to understand where each scene was taking place despite the simplistic nature. The latter stages of the show revealed a shadowy second set, further back from the front staging and hidden behind a gauze backdrop only
made transparent with the appropriate lighting. Designers Michael Holt, Kevin Sleep and Sebastian Frost have truly outdone themselves here, getting the whole atmosphere absolutely spot on.

Robert Goodale and Daniel Easton are a superb pairing. Both clearly have very enviable memories as this is by no means a short script to remember. They also had brilliant chemistry on stage, allowing you to clearly understand each relationship. Goodale’s various characters all differed enough that you could tell them apart easily, enabling you to fully immerse yourself in the story and at times forget that you were watching an actor, playing a writer, performing as an actor (a complicated explanation of what was happening, but not one that came across as so during the show). Easton had the audience on the edge of their seats from the get-go. His vocal tone and perfectly timed
delivery were infectious and almost melodic, ensuring the audience never lost interest or let their focus drop for even a second, something that effectively added to the suspense and worked perfectly for the on-edge nature of the play.

And of course suspense and fear are the biggest elements of the piece. It is easy enough to make an audience jump through the mode of film, but doing that in a theatrical medium is a different matter entirely. The clever use of volume (both stark silences and startlingly loud effects) worked wonders, and ingenious lighting was employed to great success too. The biggest positive for these moments though, was that they were not overdone. The sparseness and unpredictability of them made them so much more powerful and that was clearly evident by the united screams and involuntary spasms of fear shared by the entire auditorium.

The show is truly a masterpiece. There were a few small kinks that could be worked out – at times the dialogue got a little lost (perhaps a venue related issue?), and the couple of times the actors ventured off the stage, although intended maybe to unsettle or startle the audience, seemed a little unnecessary – but as a whole it was a fantastic and enjoyable (so to speak!) spectacle.

There is a reason The Woman In Black is still popular thirty years on, go and see it and you’ll understand why.

Unanimously acclaimed by the critics, The Woman in Black combines the power and intensity of live theatre with a cinematic quality inspired by the world of film noir. The formula delivers an evening of unremitting drama, transporting the audience into a terrifying and ghostly world.

A lawyer engages a sceptical young actor to help him tell his terrifying story and exorcise the fear that grips his soul. It all begins innocently enough, but as they reach further into his darkest memories the borders between make-believe and reality begin to blur and the flesh begins to creep…

Now celebrating its 30th year in the West End, over 7 million people have lived to tell the tale of one of the most chilling and successful theatre events ever staged.