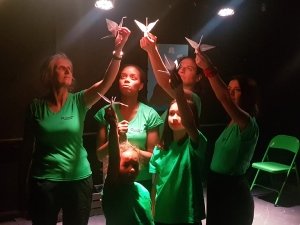 We are in a state of crisis emergency. Global warming is stealing our future. World leaders should be at the forefront delivering this message, but it’s not the politicians who’ve created a universal platform to ward off this oncoming disaster but a teenage political activist named Greta Thunberg.

However, despite Greta’s efforts to bring the richest and most offending nations on board, today’s newspapers report the United Nations Climate Summit in Madrid has put back talks on global carbon emissions until it meets again in Glasgow next year. (See Metro 16/12/2019: Nations told to wake up in 2020 as climate talks close).

Divisions over the future of carbon markets mean that Greta’s message of panic, doom and gloom is not likely to be heeded anytime soon by nations who stand to lose billions, if not trillions, of dollars worldwide by adopting practices that would cut greenhouse gases.

But a symphony of voices comprised of concerned citizens – your neighbour, workmate or friend – can be just as powerful, and perhaps more effective, in introducing simple changes to our daily routine that could help to ward off a climate crisis.

This Play Will Solve Climate Change approaches the threat of global warming at the personal and community level by presenting the stories of ordinary people, grappling with their hopes, dreams and desires while trying to lower their own carbon footprint. It is a powerful and inventive piece of story telling, involving four women and two children, who speak directly to the audience about their present lives and where they hope to be in 11 years: the child who wants to be a pop star; the grandmother who learns one of her children will remain childless because the earth is no longer a safe place; the Romanian mother who is moving to a mountain top to build a community from nature; the single woman proud of her promotion as an editor of an environmental journal who reflects ‘what’s the point if the world is coming to an end’.

If this sounds as gloomy as Greta Thunberg’s predictions, it’s not. This Play Will Solve Climate Change is also filled with music (Michael Caines, composer) and enchanting moments when plastic bags are punched playfully back and forth accompanied by uplifting melodies, cartwheels and interpretive dance.

Director Laura Baggaley also spins moments of game playing and audience participation throughout the piece, which heightens the importance of community participation and the sense that we must tackle this together.

Finally, we were all given a booklet – comprised of simple daily routines – to make our homes and neighbourhoods more eco-friendly. The commitment of Reusable Theatre Company and the talents of director Baggaley, who created such an entertaining play about hope and the ability of the average person to safeguard the future, ensure the play lives up to its title. Here’s hoping This Play Will Solve Climate Change is played in theatres across the nation.

Funny, challenging, heart-breaking and hopeful, This Play Will Solve Climate Change explores what it is to be human in today’s changing global environment.

This devised piece draws on interviews with a wide range of people – economists, climate activists, religious leaders, teenagers and artists, among others – to examine the impact of climate change on how we feel and how we live.

Reusable Theatre’s multi-generational, international team investigates the climate emergency, asking what can actors do about it? Act?