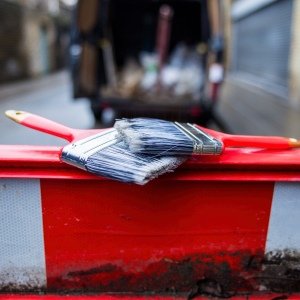 It’s the sort of narrative that is fascinating but nonetheless difficult to please people like me. Things come to an amicable enough resolution moments before the curtain call, thus tying up some loose ends – and in my view, a little too tidily. But then, if it left matters in a more ambiguous state, I might then argue that the play felt incomplete, or needed a second half to – well, tie up some loose ends! But that is not to say that True Colours can’t win: it can, and it largely does.

The production seems to suggest that Ray Stanford (Paul Marlon), who runs a painting and decorating firm (whose name, alas, has escaped my mind) and his employee Leon Goodwin (Jack Harding) don’t always tell it like it is to one another because they are men, and men don’t talk as candidly or as frankly to one another as women talk to friends and acquaintances who are also women. There’s a kernel of truth to that, particularly if the men in question (regardless of sexual orientation) would rather save face that have a difficult conversation.

But in the context of this play, I venture to suggest that there’s another reason why these two characters don’t necessarily express themselves forcefully until simmering issues reach boiling point. Put simply, they are British, with British reticence. They’re not exactly ‘stiff upper lip’ – Ray has no qualms with admitting he is reduced to tears whenever he watches the motion picture Ghost – but it is difficult to escape a thought in the back of one’s mind that had these characters been a couple of, say, Americans, there would have been more of an effort to say, “Look, this will only take a minute, and it’s important”, and be done with it.

That would, of course, make for an even shorter play that this one-act two-hander already is. Instead, Ray invites Leon for drinks after work, but this can only happen, for some reason, if Leon joins him for some Saturday morning overtime first. It is on a Saturday afternoon that Ray wants to tell Leon something substantial. Ironically enough, I can’t tell you what that something is, because if I did, it would give too much away. But, suffice to say, such things have ways of getting around, and there’s an adverse reaction when Leon finds out anyway.

Various dramatic techniques are deployed effectively, such as both characters appearing to mirror one another’s behaviours, despite being ostensibly very different people, as if to demonstrate, for example, that there isn’t much difference between reading a ‘graphic novel’ (less sleazy than Leon makes it sound, Ray’s description of it as a ‘comic book’ being more accurate, at least to me) and a red-top tabloid newspaper. There’s a good level of laugh-out-loud humour to keep the audience’s spirits up, even during more poignant sections of the story.

All this talk of possible trips to Canada and auditioning for a vacancy in a band almost scream ‘first world problems’, and as I began by saying, everything comes together almost too neatly. This slightly – and I do mean slightly – mars the otherwise convincingly realistic plotline. A story like this is unlikely to work if it were set in the digital era: there’d be direct messages and social media posts that would dull the show’s critical incident, a gritty confrontation. So, quite rightly, it’s set just before the ubiquity of mobile telephony, when – to misquote a popular song of the early Nineties, things could only get better. A thoughtful, observant and amusing play with richly authentic portrayals of the working class – something that still isn’t seen in theatre often enough.

Somewhere on a painter’s site basking in the summer sun of 1993 sit two men, not just work mates, best mates! In a time before social media when we liked to talk rather than tweet, men like Ray and Leon all over the UK find themselves discussing everything and yet never really saying anything. In the days of Shell Suits and Gameboys, of Brit Pop and Hyper-colour T-shirts, the early 90’s seemed a simpler time. But when work is not enough Ray and Leon find themselves at life’s crossroads. Unable to open up and reach out to one another, the two working class men find it hard to really say what they need to. Pushed together by coincidence, held together by necessity, stuck together by circumstance.

TRUE COLOURS is a hilarious one act play from writer Paul Stevens that is both funny and true to life. Beyond the work ‘bants’, jokes and jibes there are two human hearts that seek something more, yet like us all are far to scared to jump. Ray and Leon must find a way in their working week to say what they mean, to be honest with themselves and each other and for once, show their TRUE COLOURS.