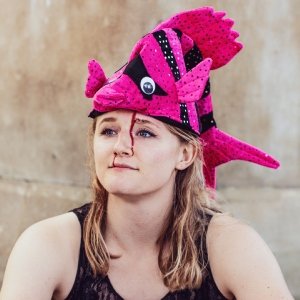 Even in the best circumstances, growing up can be difficult and experiences during childhood can have a profound and long-lasting impact on the adult we become; furthermore, social and economic background can have a huge influence on a child’s future, because while social mobility has improved over the past decades, there is still a lot to do to ensure equal opportunities for everybody. So, what does the future hold for a teenage girl having grown up having to take care of a younger sister and a sick mother?

This is the background to Tuna, a powerful one-woman dark comedy written and performed by Rosanna Suppa and presented by Airlock Theatre as part of the Vault Festival in London, which makes the audience laugh and reflect with a semi-autobiographical story about growing up surrounded by guns.

The main character is a teenage girl rightly full of anger, that is trying to get a place at university to make something of her life. However, there are many obstacles: she needs to take care of a sick unemployed mother with a history of attempted suicides, a weird cat-loving younger sister and a bunch of guns and rifles left behind by her weapons-loving dad when he disappeared a few years prior; maybe unsurprisingly the protagonist also needs to attend a rehab group for young offenders and this is not one of the things universities like. Nonetheless, she is very good at Maths and is determined to make something of her life.

Suppa delivers a phenomenal performance, using just five stools, a door and her incredible acting and physical skills, dominating the scene for one hour straight, without ever slowing down, faltering or missing a beat. I was mesmerised by Suppa’s ability to shift between characters and to tell some very dark episodes from the main character’s childhood, still managing to make the audience laugh, like when the father “jokingly” shoots a blank in the mother’s head or when the pregnant mother attempts suicide from a bridge.

I reflected a lot during the show on what I would do in the main character’s situation and I am not sure I would have the same strength and fighting attitude, the same determination to not let my social and economic background define my future. While there is a lot of laughter, at no point is the matter belittled or ridiculed, the show is a funny but very raw representation of the struggle of growing up in a deprived background and of the clashes between different socio-economic classes. I felt a little uneasy in laughing in some moments, but this is a personal limitation driven by the knowledge that I could not cope in similar circumstances and the main character’s ability to survive and fight is remarkable.

The show is a great example of theatre that entertains, moves and makes the audience reflect on serious and difficult topics that are present in modern society. Suppa’s storytelling skills are remarkable, one moment we are on a bridge staring down at the river ready to jump, another moment we are in a garden destroying innocent roses, another we are fighting with a boiler that may even be a spaceship. I cannot remember the last time a piece of theatre has made me laugh, then nearly cry and then laugh again in less than five minutes, a genuine emotional roller coaster. I hear somebody asking: “What about the Tuna in the title?” Well, for that, you will have to watch the show as soon as you get the chance!

TUNA is a new darkly comic look at the unsexy side of girls growing up around guns; the knottiness of social mobility, and a meatier side of female criminality. It’s a little less beautiful-bond-girl and a little more British school-girl. Semi-autobiographical and stored in brine.

Higher education is dangled in front of her face like a carrot on a stick. Before she can snatch it from the air, our girl must navigate her rehabilitation group; protect her cat-obsessed sister and fend off the cash fairy. Trying desperately to find an escape, and not become a product of her upbringing. However, it’s all made harder when the toys you played with as a kid were semi-automatic.

There’s physical comedy, stand up, storytelling and a bit with a bath. All of this comes together to tell this unique, true-crime-esque story. We get a small look inside a life that began surrounded by illegality, and whether those circumstances make a person congenitally criminal.
London has had some of it’s bloodiest years in decades at the hands of offenders that are getting younger and younger. Rather than present-day consequences for these crimes, shouldn’t we focus energy on understanding the lives and circumstances of those involved?

TUNA isn’t going to solve anything, but it’s going to tell you a story unlike anything you’ve seen before.