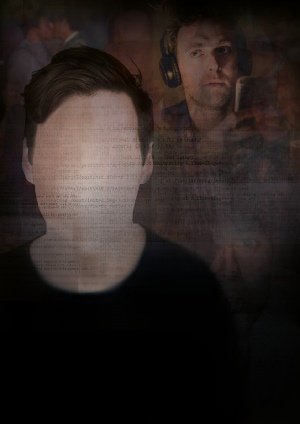 None of us can deny that we live in a digital age. Love it, hate it, or anything in between – we all have some kind of presence online and I’m sure I’m not alone in feeling occasionally that web life is almost as important as the ‘real world’ flesh and blood one.

And, this age of social media, chatrooms and apps has been around for a while now. Some of us – not me that I know of, fingers crossed – are running out of corporeal days (a 404 Runtime Error on Life.exe, if you will). As a society we all largely know what do with that – the procedures, who to call, the 7 stages of grief etc. but what happens next? What about the bits that are left behind? Not the clothes and keepsakes but the social media, the bank accounts, the chatrooms and other faucets of online expression.

This is the subject of Dante or Die’s latest production; User Not Found, inspired by Caroline Twigg’s Guardian article questioning what should happen to her husband’s digital legacy after his sudden death. User Not Found takes us through the grief-stricken days of Terry (Terry O’Donovan) following the death of his recent ex – Luka and the receipt of an email informing him that Luka appointed him executor of all of his online accounts. To keep or delete the online version of someone loved and lost is the quandary and one I think we can all identify with.

The resolution is, of course, for you to find out and not for me to spoil. But I can say that the journey there is quite something to behold. You see, this isn’t just a production about technology. It’s a production fully integrated with technology.

Each audience member receives (for the evening, not to keep), a pair of headphones and a mobile phone. These are integrated in such a way that O’Donovan’s microphone can be heard through the headphones, what he is displaying on his phone shows up on every one of the audiences and any calls made or received are audible to all. As if that wasn’t enough, interspersing and sitting behind much of the show are atmospheric sound effects and music making this a highly immersive and highly effective work.

And of course, while all of this is mostly overshadowed by O’Donovan’s truly mesmerising performance, neither would truly work without the other. Which is fine because unlike many performances I’ve seen with clever tech involved – nothing went wrong. I could barely believe it myself but while there were spares or everything available, none of the devices broke and all of the segments worked (from an audience perspective) seamlessly.

I mentioned O’Donovan’s performance briefly earlier, but it can’t be overstated that I really felt that he was the character he was playing and his use of space, given that this is an immersive performance and even more so given that the venue and the room layout changes, was timed very well.

Okay, so I confess that some elements of the narrative didn’t quite work for me and it’s a risky game to put as many water sound effects as they did into any kind of production with a captive audience but, to be honest, I’m picking at straws to some degree as this is a production well worth seeing. So much so that I might even go and see it again myself before it leaves London on the 2nd June.

Terry and Luka were together for nine years until Luka left Terry. Then Luka died leaving Terry as his online legacy executor.

Directed by Daphna Attias with words by Chris Goode and performed by Terry O’Donovan, User Not Found was performed in intimate cafes around the UK and was the hit show of Edinburgh 2018, as it examined with humour and heartbreak, what happens to our digital identities after we die.

Through smartphones and headphones, the audience is immersed in one man’s story as he is faced with keeping or deleting. In a rapidly changing digital age, a story of contemporary grief unfolds through this intimate, funny performance that gently interrogates our need for connection and the fate of our digital afterlives.

After an absence of two years, it was so good to be back under Waterloo Station at the first week of … END_OF_DOCUMENT_TOKEN_TO_BE_REPLACED

After creating the “absorbing and provocative” Version 2.0 and the “eminently lovable” Letters, … END_OF_DOCUMENT_TOKEN_TO_BE_REPLACED