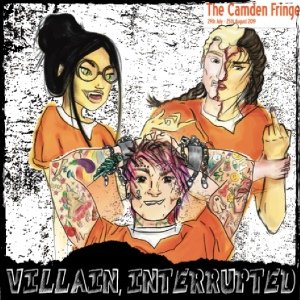 The use of acetate sheets and an overhead projector in Villain, Interrupted would surely mean there is less opportunity for things to go wrong – it’s not like the wrong video would play at an inappropriate moment, or a laptop would suddenly decide to go on the blink mid-performance. But then there’s Murphy’s law – whatever can go wrong, will go wrong, and at the opening performance of this Camden Fringe 2019 show, such was the energy of the physical theatre elements of the production that the stage vibrated and the large white screen took a tumble. “This is all part of the show!” the audience was duly informed. Maybe it was. And if it wasn’t, then it became part of it regardless.

It all made a change, mind you, from the ever-increasingly sophisticated technological wizardry that supports theatrical productions. Gina (Emma Richardson) is a prison therapist who sees her clientele as ‘patients’ rather than ‘inmates’, and a journalist has come to interview her about her work and in particular, a critical incident. The outside environment isn’t exactly a dystopia, at least perhaps not for regular people who go about their daily business. But for so-called ‘powered people’ – that is, those who have superpowers, this can result in being detained indefinitely if they fall foul of the law.

Wearing only plainclothes (they are, after all, in jail), a group of ‘super-villains’, who apparently have their own prison wing, attend a series of sessions with Gina, who believes that heroes can be moulded out of these dastardly characters through a series of psychological interventions. There is one of those absurdist plays where I found myself just going with the flow, even when it wasn’t entirely clear what exactly was going on. This is, of course, Brit-speak for ‘I haven’t got a clue’.

There’s Alice West, better known as Westie (Sofia Greenacre), Seth (Fred Stewart), Kevin (Francesca Forristal) and a bodily-fused duo, Charlie and Xanthe (Greenacre and Forristal). It is, alas, too much of a spoiler to reveal what their powers are, but there is evidently mischievous pleasure in either bending the rules set by Gina about their ‘safe space’, or otherwise completely ignoring them. That the therapy sessions exist at all is evidence that the ‘villains’ have not been abandoned altogether, and there’s humour to be found in the reactions and responses to the various activities Gina attempts to guide the group through.

Additional characters, of which there are a fair few, are provided courtesy of puppeteers Robbie Bellekom and KT Roberts. This is primarily a comedy, but it is possible to draw deeper meanings from the storyline, in which those stripped of their powers by the state have no say at all; even if they come up with some sensible ideas, the prison authorities refuse to take heed. The themes are broadly applicable to many situations, too – there are those who try to manipulate, to modify behaviours, to transform people away from what they are to whom the transferor wants them to be.

The play appears to be somewhat sympathetic towards the villains, portraying them as people with thoughts, feelings and emotions. It’s certainly a departure from characters being unequivocally on the side of ‘good’ or ‘evil’ and holds the audience’s attention from start to finish. A slick and briskly paced production.

Meet Gina, a therapist working in a prison for super-villains – determined to turn every last one of them into a Hero. Things don’t go exactly to plan…

In a new play exploring redemption, rehabilitation and the nature of evil (but funny), Gina plunges into the prison system for powered people and is forced to question everything she believes in. Her charges include King Cobra; a venomous female drug baron, Lady Injustice; two teens fused into one body, and Ink Lord; able to bring art to life and angry enough to burn the world down. From Daddy issues (therapy staple) to toxic masculinity, Gina grapples with problems she’s ill-equipped to face. Will they see the error of their ways? Or is the error Gina’s, in thinking they’re redeemable?

Think back. Has anyone ever said to you that looks don’t matter, its personality that counts’ Anyone … END_OF_DOCUMENT_TOKEN_TO_BE_REPLACED