You are here: Home / Reviews / Play / What Happens Next Will____Your____ at the White Bear Theatre 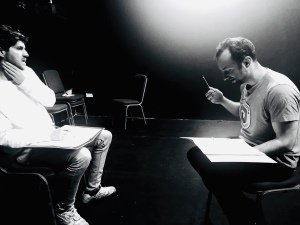 It’s not often that a promotional video attracts me to a particular show but, having watched the one for What Happens Next Will ____ Your ___ at the White Bear Theatre, I knew I had to go and see the production.

Two men on the roof of a 28-storey building. At first glance, they couldn’t be more different. Alex (Ryan Whittle) is dressed in a ‘smart casual’ way that suggests a lot of work has gone into his look. From his nicely tidy hair to his amazing shoes, he is every inch a young man of a certain status. By contrast, the other man Darren (Chris McCurry) looks like a down at the heels working-class fellow. Not only is there a contrast in their looks, but they also seem to be appreciating the roof-top locale in different ways. Darren is sat, fairly relaxed watching Alex who seems very nervous, pacing up and down, adjusting his clothing and continually checking his phone. Darren tries to strike up a conversation with Alex who distractedly explains that he is in the building for a party and is waiting for his girlfriend Nikki to join him on the roof. Deciding to go and find her, Alex heads to the door to the stairs but find it is not only closed it is locked from the inside trapping both men on the roof. He then tries to call Nikki but only gets voicemail and it looks like the two men will have to wait for someone to come and find them. While this is going on, Darren keeps talking and finds out that Alex is a journalist – mainly for online but, as Darren says, he will make it to real papers one day. Alex realises that he could have some fun with Darren- who he believes he is mentally and socially superior to – and takes control of the conversation, drawing out some opinions from Darren that are about as ill-informed and un-PC as you could imagine. As the words spew from Darren’s mouth, Alex surreptitiously starts to tweet about this guy he is stuck with. As the tweets hit the ether, the retweets, comments and replies start flying back leading to an eventual outcome that will be both profound and life-changing.

Well, what a revelation. I went to the theatre thinking I was going to watch a hilarious comedy and left completely blindsided by the powerful writing and acting. I really don’t want to give too much away about the plot but I can say that, like the rest of the audience, I was really drawn into the humour of this one-act play. After all, it’s fun to laugh at someone who is below us on the socio-economic and educational ladder, isn’t it? And even better when they don’t know they are being laughed at. Think about all those conversations you’ve had with friends and colleagues after a Love Island contestant has said something crass and you’ll know what this play are getting at. The anonymity of the internet and social media make it even easier to laugh at these people – after all, they are never going to find out are they? In this play, we are complicit in the humiliation of Darren and that forces us to stop and take a hard look at ourselves. After all, which is worse, the uneducated fool spouting rubbish, or the educated person mocking him without his knowledge?

Whittle and McCurry have real chemistry on stage and work together so well to bring the characters off the page and into our lives. The guys, who wrote and directed – along with Fight Choreographer Christian Cardenas really put the characters through their paces and the entire play goes down a road that seems very familiar at first but finishes with an ending that is as surprising as it is shocking. My only quibble with the writing was why, when both people had working mobile phones, did neither of them think of contacting anyone – apart from Nikki – to get the door open? Having locked myself out of my flat once, I can guarantee that the fire brigade would have come out for this emergency.

However, minor quibble aside, What Happens Next Will____ Your____ is a really great theatrical piece that is well written and acted and gets to the heart of today’s internet-obsessed life and forces everyone to examine themselves and their thoughts about their fellow people.

Two strangers, freelance journalist Alex and security guard Darren are alone on the roof of an apartment block in Hackney. When they find themselves trapped and motormouth Darren’s incessant questions give way to his questionable views about a number of topics, Alex shares his frustration with the world via Twitter. As interest grows and Alex is encouraged to delve further into the life of his odd subject, the online storm reaches boiling point.