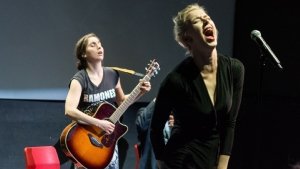 ‘Yes… yes… Ok… Yes… Now, Apologise… Apologise! Thank you’
In modern politics, we often wonder if it’s all made up. A big game, with different players shifting positions, and all saying the same bullshit. This is the possibility taken up by New Public’s latest show, White Noise. Isn’t politics, and perhaps wider society, just a meaningless circulation of polite lying and façade?

Christopher Adams takes to the stage in a loose-fitting, expensive looking suit, and launches into a just about believable speech about ‘respect’, ‘community’ and ‘togetherness’. He’s good looking, charming, smiling. All standard politi, but it’s Vault Festival, so who knows? He might be serious. Four performers enter and begin to dress, putting on makeup and pouting as they go. Then the next 45 minutes is uninterrupted chaos.

The structure (if such a word applies here) seems to be following the psychological downfall of four public speakers (politicians?) as their post-truth doublespeak reveals itself to be increasingly vapid. All the while egged on by Adams who provides them with props, microphones, outfits and food as they cover themselves in shit (more or less metaphorically). They dance, give impassioned but transparent apologies, sing meaningless protest songs, seemingly underlining the meaningfulness of living in a meaningless world.

At points, White Noise relies on fairly standard-issue dystopian anti-political tropes: literal background white noise, broken technology, overhyped meaningless emotions, political lying. There’s also a kind of snobbery about how ‘everyone else’ is speaking nonsense, but, apparently, New Public have seen through all the smoke and mirrors and accessed the real ‘take’ on reality.

In general, however, the tone is comic, and Adams gives a stand out performance as the architect of chaos, charming and chaotic in equal measure. Tom Kelsey gives an impressive turn as a masked figure of the future, a limp mannequin used by other actors to signal their beauty and brilliance to the misguided masses.

Despite its use of cliched dystopian tropes, White Noise is a searingly funny, assassination of the ‘modern condition’ and contemporary communication.

Showcasing New Public’s bold and dynamic brand of physical Theatre, White Noise holds a fun house mirror up to the manipulative personalities that dominate public life, and journeys into the relentless media machine that has commodified reality, polarised politics and sacrificed truth at the altar of sensation.