You are here: Home / Reviews / Play / Who They Were at the Etcetera Theatre | Review 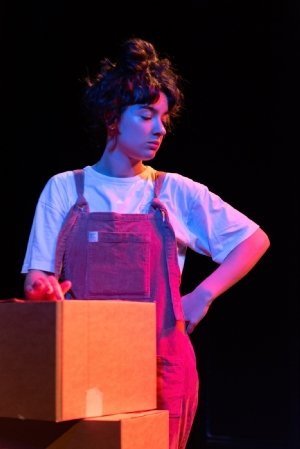 As Florence (Adela Rajnović) and Eros (Lucy Abraham) engage in yet another petty argument (or maybe it was it the same one, but continued from where it was left off previously), Eros asserts that nobody is really special, and that the term ‘special’ has become overused. I can see where she is coming from – it reminded me of a café in Brighton I went to many years ago that had ‘Have A Nice Day’ pre-printed on its receipts: the sentiment is pleasant enough at face value, but is it really all that meaningful if the same message is on every single receipt? So, everyone is special, but how does that make one any more special than another?

It’s this kind of philosophical talk that might be a great way of putting the world to rights over a catch-up with a good friend into the small hours of the morning, but it doesn’t necessarily make for good theatre. Florence has turned up after a hundred years – there is disagreement as to whether it is actually ninety, but I’ll take the more onerous figure for the sake of argument – and now needs to collect her boxed-up belongings. What would be a tremendously sheer passage of time for humans is not so for these immortal beings.

Immortality here does not mean these beings have gone on to great exploits – at least, not yet, because by definition there’s plenty of time to do anything and everything. Still, most of their reminisces are about (I think, anyway) pre-immortality, when they worked for a living. Immortality doesn’t grant the beings any substantial superpowers besides the inability to die, so Florence was held up on the Tube and needed to arrange for someone to pick her and her boxes up. They are unable to eat food: initially, their longings for various foodstuffs are mildly amusing, until it becomes increasingly clear what they live on instead.

Joe (Ruby Herrington) is ushered in (she had a pre-booked appointment). Eros runs something called the Last Chance Helpline, but something doesn’t seem right when she takes a phone call from someone in distress only to tell them to calm down and send an email instead. But it’s a way of drawing people in who wish to end it all, as well as providing sustenance for the immortals of the dark. Joe’s story is interesting, but it’s also a little meandering, and there’s an unexpectedly pleasant plot twist that steers the narrative away from the prospect of a scene straight out of The Twilight Saga movie series.

A few chucklesome punchlines laced with dry wit aside, the play is largely relentlessly either dispiriting, argumentative, or both at once. The dialogue covers a lot of ground, but much of it doesn’t go below surface level, and the show would have benefited from fewer topics of conversation explored more deeply. There’s a strong sense that eternal living isn’t all it’s cracked up to be, and with the world being what it is at the moment, perhaps some sympathy can be elicited for Florence and Eros, whose memories of previous generations are presumably still highly lucid.

Rather than dramatizing the past through, say, flashback scenes, there is an over-reliance on exposition. ‘Tell, not show’ seems to be the mantra of the production. To be fair, all three characters have backstories that television shows like The X-Factor would love to be given the opportunity to showcase. It’s an ambitious and unusual piece of theatre, but it ends rather abruptly: was time of the essence after all?

Two immortal women, come back together one hundred years after their relationship ended. They must confront the times then and now. What they were and who they are now.