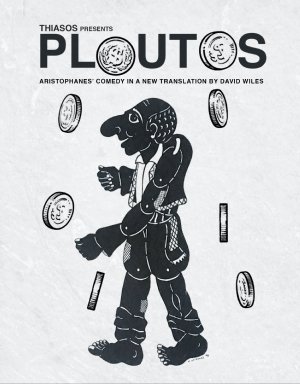 There’s a reason, generally speaking, why some plays aren’t performed all that often, namely that there are better ones to put on instead. In Ploutos, which translates as ‘wealth’, Chremylos (Charles Sobry) is a poor man with a slave, Carion (Salv Scarpa). Yep, a poor man with a slave – it’s that sort of play, where one ends up just going with the flow, lest one falls into the trap of overanalysing the various things in the play that don’t quite make sense at face value, and missing the bigger picture and the salient points the production is trying to get across.

As people are still getting used to attending live performances in person in a ‘Covid-secure environment’, even hearing a band tuning up just before the show begins is a winner for the unassuming audience on the night I attended – commendably, there is no recorded music at all as a number of actor-musicians put their instrumental skills to good use. Direct addresses to the audience help maintain engagement, but even so, sometimes the overarching messages are a tad laboured – at the centre of the narrative is the concept that one reaps what one sows. For most of the gods of the Ancient Greek world, led by Zeus, their ‘tyranny’ (that is, the contemptible manner in which they have treated human beings) therefore comes back to bite them.

What stops this from being a morality play, however, is the sheer amount of silliness. Don’t say you weren’t warned: the script includes flatulence in its stage directions. Truth be told, this production isn’t for everyone, and the near-relentless exaggerated mannerisms and playing to the gallery can be grating for those who prefer subtlety. Wealth (Oengus Mac Namara) – that is what he calls himself, rather than Ploutos – is persuaded by Chremylos that he has, in effect, more power than Zeus: if the god of wealth were to cease all activity, eventually nobody would have any wealth and there would be nothing to sacrifice to Zeus or any other deity.

With energetic choreography, live music, physical theatre, rhyming couplets galore and some exquisite costumes, one would be forgiven for thinking the kitchen sink and then some has been thrown at this production. It’s certainly very slick. Parts of it, though, would probably be more enjoyable as a late-night performance at the Edinburgh Festival Fringe – by which point in the day, your reviewer will have been imbibing periodically since lunchtime, or even before.

Even so, there are some laugh-out-loud moments, together with some intriguing observations about what would happen if wealth were far more evenly distributed amongst all members of society than it was in ancient Greece. It almost goes without saying that some things are timeless, and there are, for instance, remarks about the human condition that could be reasonably applied to living in the twenty-first century.

The good thing about raised voices throughout is that every line rang out across the theatre: not a single word was remotely difficult to decipher. What is perhaps less clear is whether or not the production considers social and economic utopian visions are just plain absurd, or actually something that just might work. A charming and bombastic production.

Following their acclaimed productions of Euripides’ Hippolytos (The Cockpit, London, Gardzienice and Teatr Polski, Warsaw) and Bacchae (New College Oxford & Gardzienice), Thiasos presents Ploutos, Aristophanes’ hilarious satire about how to deliver what everyone wants, wealth. Ploutos brings songs, dances, feasts and festivity, all set in the anarchic world of the shadow puppet hero Karaghiozi in this new translation by David Wiles with designs by Abdelkader Farrah.

Ploutos recently premiered with an outdoor performance at the gardens of Sarsden Glebe Farm in Oxfordshire. In November, the company will perform as part of the Generator of Hope Theatre Festival in Poland at the Gardzienice Centre for Theatre Practices and in the Academic Cultural Centre in Lublin. Title role is played by Oengus MacNamara (Game of Thrones).