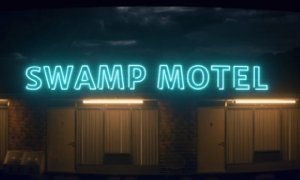 ‘The experience will begin on Zoom,‘ the email invitation reads, and apart from a few pointers about sharing your screen and checking passwords carefully, this was all my team and I had to go on when it came to knowing what to expect from the online immersive theatre / escape room / alternate reality game that is Plymouth Point. Necessity is the mother of invention, and where some of us spotted the fun potential of Zoom virtual backgrounds (shirt and pyjama-bottom business meetings, conducted from the surface of the moon, people!) creators Swamp Motel saw this and took it to a whole other level. Perhaps lockdown is the moment when alternate reality games finally hit the mainstream.

Plymouth Point is for anyone who’s ever found themselves with an internet browser open on their second monitor and WhatsApping under the desk at the same time as video-calling. I’m guessing that’s all of us! Though the invitation here is to communicate with those on the call in an attempt to solve a mystery together. Cue competing suggestions of how to divvy up the work, shrieks of surprise as the twists and turns, mad tangents and dead-ends.

We’re soon diving into a rabbit-hole of fictional company websites, Facebook profiles and email accounts. At one point, one of my team-mates gasps: ‘I’m getting really freaked out about what’s real on the internet and what’s not.’ For much of the playing time, this question disappeared for me: I found myself searching for clues, not distinguishing between content created by the company and that which had been cleverly co-opted into their game, providing neat connections back into the real world. The attitude of my sceptical team-mate is probably a wiser approach to the modern world!

So far, so good. If there was one thing that prevented this experience living up to what I saw as its full potential, it was the feeling that we were constantly searching for (yet) another password. The first one we worked out seemed a good test of our lateral thinking, so having our handheld to find the next felt something of a letdown. A couple of times we realised we weren’t logging in successfully because we were typing a phrase into the wrong page, with so many tabs open with just a password box on them. Sure, in an escape room there’s often a fair amount of hunt-the-padlock-code tasks. In that already mature game-type, the best examples are those which not only have more variety of puzzles, but which also weaves them into the story seamlessly. A couple of great touchpoints took us away from our linear search-engine trawl for passwords, but these were brief exceptions, rather than the rule.

The overall plot of Plymouth Point, and its denouement, were certainly satisfying for me: I could see what they were doing as a whole. Their world-building was great, and I did leave the show with a pleasant tingle of fear about how far the claws of the experience would reach into my real-world life.

To be the best example of this emerging type of show, I’d like to see just a bit more integration of the puzzles into that vividly-created world. Right now, it feels like we figured out the code to let us into the library where Poirot has gathered the suspects in order to reveal the killer. Ideally, we’d be cast as the detective himself, and reaching that final room would be a matter of solving the case ourselves.

Can you find Ivy?
An immersive theatrical thriller. The at-home experience starts on Zoom, for you and up to five others. Be transported into a world of conspiracy, cults and corporate deceit.

Ivy Isklander has gone missing. The residents of Plymouth Point are concerned. Gather your team, and get your ticket to join the Residents Watch emergency meeting.
https://www.plymouthpoint.co.uk/

I wouldn’t exactly say Ben Forster appearing as himself in this musical comedy is a career highlight (he is, after all, someone who has played the … END_OF_DOCUMENT_TOKEN_TO_BE_REPLACED

It’s an intricate plot, laced with some subversive humour - that the female character is simply called ‘The Woman’ (Molly Lynch), for instance, is … END_OF_DOCUMENT_TOKEN_TO_BE_REPLACED

Andrea McArdle didn’t, when the 1978 movie Rainbow was released, look or sound like Judy Garland, and she still doesn’t. You’d be forgiven for … END_OF_DOCUMENT_TOKEN_TO_BE_REPLACED

TENNIS ELBOW is the first play that John Byrne has written for thirteen years, and is in fact a companion piece to his critically successful Writer’s … END_OF_DOCUMENT_TOKEN_TO_BE_REPLACED

It’s all a bit banal, really - or perhaps I’m too heavily influenced by some of the other online productions that I’ve seen recently, which deal with … END_OF_DOCUMENT_TOKEN_TO_BE_REPLACED