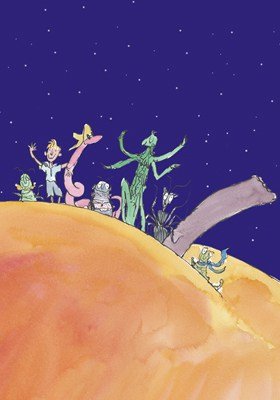 Roald Dahl would be 100 years old this year and in celebration of this event the Polka Theatre in Wimbledon is presenting James and the Giant Peach.

In a seaside town, young James Henry Trotter (Nathan Guy) has a lovely life with his friends, his parents and the sea to paddle in. That is, until his parents die having unexpectedly been eaten by a rhinoceros and James is left an orphan. Sent to live with his two horrible aunts, James’ life goes downhill as he is treated as a drudge, beaten for no reason, improperly fed, and forced to sleep on bare floorboards in the attic. Then one day, a stranger appears and gives him some magic crocodile tongues which, says the stranger, when drunk with water, will bring him happiness and great adventures. Unfortunately before he gets a chance to use the tongues, James spills them onto a peach tree which then goes on to produce a giant peach. One night, whilst cleaning up the garden ,James finds a tunnel that leads into the centre of the peach where he meets the other inhabitants of the fruit – Centipede (Clive Duncan), Miss Spider (Ebony Feare), Old Grasshopper (Jonathan Kemp), Earthworm (Lane Paul Stewart) and Miss Ladybird (Rebecca Yeo) – all of whom have been affected by the crocodile tongues and are much bigger than the usual insects. James hates living with his aunts and so he and his new friends start the giant peach rolling down the hill away from his horrible relatives and onwards towards a great new adventure.

Children are the harshest theatre critics in the world. Forget Michael Billington or Quentin Letts, if a child doesn’t like a play, they will make sure everyone knows it. So, putting on a children’s show must be a daunting task for any production company. It must be worse when dealing with a classic such as James and the Giant Peach. However, luckily, this production has not hit any of these problems. This is a slick and professional show which takes the original story and, thanks to David Wood’s adaptation, is presented in a way that grabbed hold of the children immediately and kept them entertained for around 90 minutes. The story is pitched perfectly to entertain the children and keep the attention of the adults throughout.

Keith Baker’s design is bright and cheerful – especially the costumes – and makes each character easily identifiable. Both the spider and grasshopper costumes in particular were really beautiful and looked stunning. Director Roman Stefanski and his talented cast keep the story moving at a really great pace and credit has to go to Nathan Guy who, as James, is immensely likeable and endearing, and obviously got all the children on his side really quickly. I also want to mention Clive Duncan and Ebony Feare who, as well as their main roles also played the nasty aunts Sponge and Spiker respectively and, Johnathan Kemp whose grasshopper turned in a pretty mean piece of violin playing.

A quick word about the theatre. We are really meant to only concentrate on the production but I have to say that the Polka Theatre is a wonderful venue. If you are going to see the show, I recommend getting there early as there is a lot to see and do, including a lovely display of puppets from other Roald Dahl productions and a wonderful train in the cafe.

All in all, James and the Giant Peach is a lovely children’s play that starts well and gets better and better as it goes on. There were many highlights, including the audience assisting with rolling the peach, the underwater sequence – brilliant use of video – and the sharks (I will say no more). Although children’s theatre isn’t really my thing, I thoroughly enjoyed my afternoon in Wimbledon.

A fantastical adventure half way around the world…
To celebrate Roald Dahl’s centenary year in 2016, Polka is delighted to bring back James and the Giant Peach, based on one of Dahl’s most popular books. Having been last performed in 2009, we are thrilled to be brining Dahl’s work back to the stage to commemorate his continuing influence on children’s literature and entertainment.

With a script by Olivier-Award nominated children’s playwright David Wood, this vibrant production captures the playful spirit of Dahl and brings his eccentric characters bursting to life, engaging directly with a young audience. Running from 27 May – 14 August, James and the Giant Peach is created for ages 5 – 7.

One dark night a mysterious man gives James Henry Trotter an unexpected gift… a bag of glowing, wriggling lights, and a promise of magic. When James drops the bag underneath a dead tree, something amazing happens – a single peach begins to grow, and grow, and grow. Little does James realise that the enormous peach is the beginning of a marvellous adventure and a chance to escape his ghastly aunts…

In a story that spans the English countryside and a journey over the ocean all the way to New York City, this exuberant show makes use of clever staging, puppetry and songs to create a journey that is as stunning as it is funny.

James and the Giant Peach is directed by Roman Stefanski, Associate Director at Polka. Design is by Keith Baker, with lighting by Jim Simmons. Music is by Olly Fox.

People are like swans. Hopefully, that’s got your attention and while you may be questioning my statement, it is true.  We all have a surface that we … END_OF_DOCUMENT_TOKEN_TO_BE_REPLACED

In case anyone in the audience didn’t know what a toilet looks like, a neon sign reading ‘Toilets’ hangs in between, well, two toilets. There probably … END_OF_DOCUMENT_TOKEN_TO_BE_REPLACED

Dolly Parton’s musical 9 to 5 sets out to do one thing: ENTERTAIN, and it does this superbly. The show has just started an extended tour at Wimbledon … END_OF_DOCUMENT_TOKEN_TO_BE_REPLACED

I feel so comfortable here in this large airy Church, seating is socially distanced and face mask compliance is at a level that some large West End … END_OF_DOCUMENT_TOKEN_TO_BE_REPLACED