Britain, so a London cab driver once told me, is obsessed with the Second World War, as though it happened just recently. Power Luncheon would seem, at surface level, to be very much in that vein, imagining what conversations between King George VI (Peter Saracen) and Winston Churchill (Edmund Dehn) would have been like during three moments in World War Two – the start of the Blitz in September 1940, then August 1943, then June 1944 – specifically June 6, or ‘D-Day’. There’s even a map of the world in whichever room of Buckingham Palace they apparently liked to meet in, and much mention of ‘Empire’. 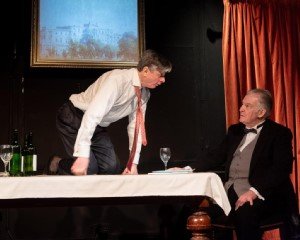 The backdrop of war, however, gives rise to what eventually becomes something else rather disturbing in its own right. The King throws his proverbial toys out of the pram: not, bizarrely, because he is unhappy about military strategy or other affairs of state, but because he has convinced himself that Churchill must stay for the purposes of (wait for it) companionship. Churchill declines, as he must get back to work: D-Day must be attended to.

It’s all a bit contrived, frankly, not because it’s an irreverent portrayal of a monarch (although there is that), but because it’s not the sort of behaviour that wouldn’t have gone unnoticed by palace staff. All that yelling and wailing would have been overheard by somebody somewhere. Churchill himself, portrayed as the consummate statesman in this production, might also have raised concerns with appropriate people with regards to the King’s ability to rule if his conduct and thinking was really as peculiar as it was portrayed here.

The narrative meanders like a river rather than taking a direct route to anywhere. In context, there’s nothing inherently wrong with that, as these are private informal meetings – that is, without minutes being taken – so the conversation is indeed likely to go in miscellaneous directions. The entire play is set in the same room, and there are no other visitors of any kind, which, again somewhat strangely, leaves His Majesty and his Prime Minister to serve their own food and drink – and clear up after themselves.

Dry wit permeates the dialogue, most of it coming from the King, who seems to want to be as agreeable as possible to Churchill in the first half of the play, before becoming borderline paranoid in the second half as to what Churchill’s ‘true’ motives are with regards to – well – everything. There is insecurity and immaturity to this King’s perspective. Is the whole play really about one man’s inferiority complex? It would go some way to explaining why it wasn’t always easy to maintain interest.

The production is confident enough in the script not to embellish it with too much in the way of sound effects and other technical wizardry. It’s something different, for sure, and the play does well to include some of Churchill’s more controversial (and, by contemporary standards, inappropriate) views, rather than portray him purely as The Man Who Saved Britain From The Nazis. But it felt like a harder slog than it needed to be, and perhaps could do with some trimming to make it into a tighter, ninety-minute, one-act piece of theatre.

Winston Churchill and George VI between them satisfy all three of Shakespeare’s paths to greatness: being born great, achieving greatness, and having greatness thrust upon them. Both born into backgrounds of exceptional privilege and influence, one by personal ambition achieving the position of prime minister and war leader, the other by the vagaries of circumstance finding himself in the position of monarch.

In World War II they met every Tuesday for private luncheons to discuss affairs of state. Power Luncheon imagines – with some licence – three of these meetings, in 1940, 1943, and on D-Day 1944. An exploration of how interpersonal politics might leak onto the stage of world politics and how the course of history can be altered by the emotional needs of the child who has never quite left the nursery.

Shoes, one would have thought, are fairly recession-proof. The problem for Charlie Price (Joel Harper-Jackson, reprising the role he previously played … END_OF_DOCUMENT_TOKEN_TO_BE_REPLACED

The descriptions of what happens in this show are so vivid that paradoxically they leave nothing to the imagination – and, at least at the performance … END_OF_DOCUMENT_TOKEN_TO_BE_REPLACED

Although not entirely perfect, this staging – the first ever in the UK – of Pablo Sorozabal’s Zarzuela (Spanish Operetta) is brilliant, atmospheric, … END_OF_DOCUMENT_TOKEN_TO_BE_REPLACED

As theatre productions go this is a memorable, magical experience filled with heart and love and so many tiny thoughtful details, that I’m not sure a … END_OF_DOCUMENT_TOKEN_TO_BE_REPLACED