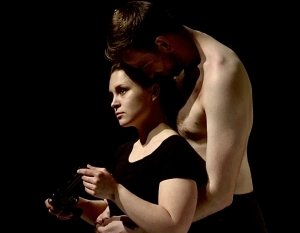 Would you point a gun at the head of the one you love? Chriss (Laura Jackson) does so at Damon (Michael Hogg), and Damon’s response, shouty and expletive-ridden as it is, is quite understandable.

But, as it turns out, once Damon ‘breaks character’, that this was all part of what this couple call a ‘scenario’, a regular occurrence at home where they play characters with the same names as themselves but within a pre-agreed setting. The purpose of these scenarios is, ultimately, sexual arousal. What transpires in Primrose Path is the oddest example of foreplay I’ve ever come across, however, much relationship experts state that there’s no right or wrong way, so long as explicit consent is involved.

When Sarah Kane’s 1998 play Cleansed (my review of the 2016 National Theatre production described as ‘Dismemberment Central’) and the 1980 Joy Division song ‘Love Will Tear Us Apart’ come to mind, one gets the feeling this isn’t going to end well. The idea of love being such a powerful force that it can even destroy is nothing new but seeing it in action here is nonetheless a harrowing sight, particularly as the physical and psychological scars continue to mount. Then there’s a concerned neighbour, named only as Man (Samuel Nicholls), who, with justification, wants to know what all the shouting is about.

Slightly concerned that my own neighbours may eventually knock on my door wanting to know the same thing, I gave up adjusting the sound levels on my speakers whenever the dialogue returned to conversation at more ‘normal’ levels and back down again as the shouting resumed, and just kept it at a lower level, such that whenever the conversation was considerably quieter, the odd line here and there was missed. Still, as Chriss, puts it, “Our scars bind us together. We are the permanent tapestries of one another’s work. We are a walking testament to the interests of the bond we share.”

As both verbal and physical punches are thrown, it is easy, from the outside looking in, to wonder why on earth either party doesn’t just walk away from it all. But that is to underestimate the complexity of the situation, almost certainly made worse by the near-constant invention of new scenarios, even one in which one of the scenario’s stipulations is that all of their previous rules about their scenarios are to be broken. In a way, there’s a sense of relief when this happens, as it’s a way out of the tit-for-tat arguments about who has broken what rule previously, which, had it lasted much longer, would have taken the ‘eye for an eye, tooth for a tooth’ principle to the point where both characters would have been left blind and toothless.

In the melee of scenarios, it becomes less clear, if it was ever clear in the first place, what is genuinely being spoken and felt and what are expressions of assumed characters. There’s something strangely compelling about this production, even as I found myself slightly dizzy from some of the presumably deliberately shaky camera work, a metaphor, perhaps, for the unsteady nature of Chriss and Damon’s relationship. Not for the fainthearted, it’s an exhausting watch, but also, pardon the pun, well played.

Catch Me is a new musical written by Arnoud Breitbarth and Christian Czornyi and directed by Adam Lenson, that debuted in 2016 at the Arts Theatre in … END_OF_DOCUMENT_TOKEN_TO_BE_REPLACED

There are usually, broadly speaking, two large demographics of patrons at a family show like The Wizard of Oz – children and their responsible … END_OF_DOCUMENT_TOKEN_TO_BE_REPLACED

This production makes excellent use of the available stage space - and, rather like the big musicals at Chichester Festival Theatre, has its cast … END_OF_DOCUMENT_TOKEN_TO_BE_REPLACED

This is an enjoyable and dynamic production of Henry V at the Sam Wanamaker Playhouse. Does it matter that there is innovative action and that it is … END_OF_DOCUMENT_TOKEN_TO_BE_REPLACED