Priscilla Queen Of The Desert started out as The Adventures of Priscilla Queen Of The Desert, a 1994 Australian film that became a cult classic and starred Terence Stamp as a transgender woman and even won an Oscar for Best Costume Design. The musical version of the film with a book by Stephan Elliott and Allan Scott debuted at the Lyric Theatre in Sydney in 2006 before hitting the West End and Broadway where it won an Olivier and a Tony respectively, once again for Best Costume Design. 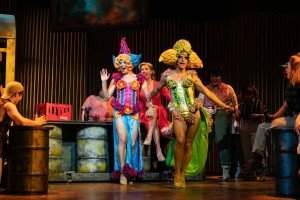 Priscilla Queen Of The Desert tells the story of Anthony ‘Tick’ Belrose a drag queen whose stage name is ‘Mitzi Mitosis’ who needs to get from Sydney to Alice Springs to visit his wife and young son and perform at her casino. He takes with him fellow drag queen Adam Whitely ‘Felicia Jollygoodfellow’ and a transgender woman, Bernadette Bassenger and the trio head off into the desert in a decrepit old school bus they name Priscilla. Along the way, they meet with a variety of odd characters and reveal their true selves to their fellow passengers as they head towards their final destination.

There is only one word for Priscilla Queen Of The Desert – fabulous – which it is in many ways. The costumes are spectacular (of course) and the performances of the twenty-strong cast give off enough energy to light up the whole of Bromley town centre where it’s currently on tour. The standout performance is from Nick Adams as ‘Adam/Felicia’ who fizzes and sizzles across the stage as camp as a row of tents. Not far behind is Edwin Ray as ‘Tick/Mitzi’ and the superb Miles Western as ‘Bernadette’ who has the range to make us laugh one minute and cry the other as we find out why she’s so unhappy with her life.

The ensemble is superb whether as drag queens, country bumpkins or outback cowboys and there’s also the presence of three Divas who do a lot of the singing and appear at various times almost as a Greek chorus a la Little Shop of Horrors and City Of Angels. They’re ably supported by Musical Director Richard Atkinson and his band of six musicians although at times it’s all a bit over-amplified which is, unfortunately, a bit of a trend these days.

Priscilla Queen Of The Desert is a proper jukebox musical as there are no original songs but includes some of the finest disco anthems of the 20th century including ‘Boogie Wonderland’, ‘Don’t Leave Me This Way’, ‘Go West’ and ‘I Will Survive’ (what else). There are twenty-five other songs including an aria from La Traviata (I have no idea why) and the strange use of MacArthur Park which only seems to be there so Tick can have his chance to sing about a cake (there is one) being left out in the rain (there isn’t any)!

If the show sounds fluffy and trite and a typical jukebox musical, well at times it is all of that and more but it also addresses homophobia, prejudice and what it means to be different in a country that doesn’t really accept you or know what to do with you. In the midst of all the fun and fluff, the writers are making a point and once or twice, it hits home like a hammer blow.

Priscilla Queen Of The Desert is definitely a fun night out. It’s one of the better jukebox musicals with an excellent book at its core and you can’t help but get carried away with the sheer exuberance of the performers and the audience and leave the theatre not only singing your heart out but realising there’s a message in there too.

Pack up your wigs, heels and all the glitter you can find, because the iconic, joyous and award-winning musical Priscilla Queen of the Desert is back in Bromley.

Based on the Oscar-winning movie, Priscilla is the hilarious and heartwarming adventure of three friends who hop aboard a battered old bus bound for the Outback to put on the show of a lifetime. Two worlds collide on this fabulous journey of self-discovery and friendship, and along the way, our trio discover the true power of love, acceptance, and sass!

With more glitz and glamour than ever before, this show-stopping musical features spectacular dance routines, a dazzling array of eye-popping costumes and a scintillating, sing-a-long soundtrack full of your favourite dance-floor classics. Including Hot Stuff, It’s Raining Men, I Will Survive, Girls Just Wanna Have Fun, Finally and many more; it’s pure joy guaranteed!

It is 2002 – another Royal Jubilee year, and HRH (Mary Roscoe) is due to open a new Science wing in a 'sink' comprehensive where Dr Derek Jones … END_OF_DOCUMENT_TOKEN_TO_BE_REPLACED

Dr Anna LaRosa (Dr Stefania Licari) has a lot to say. Just as well, as she’s the only one on stage in this medical comedy, which largely draws its … END_OF_DOCUMENT_TOKEN_TO_BE_REPLACED

Nikhil Parmar’s one-man show, originally written as a TV pilot, manages to touch on a wide range of themes from Islamophobia to modern fatherhood with … END_OF_DOCUMENT_TOKEN_TO_BE_REPLACED

Handel’s 1738 opera Serse (or Xerxes) is an exploration of power, love and human frailty. King Serse falls in love with the voice of his brother … END_OF_DOCUMENT_TOKEN_TO_BE_REPLACED

Lea Salonga has her fans. She also has some superfans, the ones who yell, “I love you Lea!” at almost every opportunity. If that wasn’t enough, there … END_OF_DOCUMENT_TOKEN_TO_BE_REPLACED