New York writer Crystal Skillman’s 2018 play won the Earth Matters On Stage new play competition and was first staged at the University of Alaska in the same year. It concerns two Seattle teenagers who embark on a cross-country motorbike tour to join a group of protesters on the east coast. But, as they follow an oil pipeline they gradually discover that what may actually be their true danger is growing up. 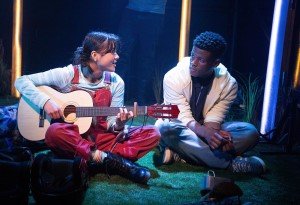 The lavish production, by Jermyn Street standards, features a superb set by Zoe Hurwitz, incorporating a revolve, a lake and a grassed acting area. To this is added imaginative lighting by Pablo Fernandez Baz and projections by Elizabeth Mak, ensuring that visually there is always something to grab the attention as the young people make their way east and to self-discovery.

Director Hersh Ellis also has an eye for the visual, the most imaginative being the creation of the motor bike whenever it is needed by two members of the cast, Richard Holt and Salma Shaw. Holt is a very versatile actor, being required to create many different roles, including both Zoe’s father and Rain’s father, who is in reality dead. His monologue in Act Two is one of the most impressive features of the evening.

Salma Shaw is also required to take on many roles, from Rain’s mother to The Moon!

The sixteen-year-old age teenager Rain is played by the highly talented Jordan Benjamin, who manages to find some subtlety in the script as well as creating a believable role. He is on stage almost throughout as is Zoe, acted by Mei Henri. Both demonstrate skills in singing and playing the guitar, as the playwright uses music throughout the play, sometimes simple, unaccompanied songs, or as guitar solos or as Rock music blasted over the theatre’s sound system. The music is composed especially for this production by Bobby Cronin.

Skillman’s multi-level and often surreal play tries to cover a lot of ground in its 135 minute running time.

There are no printed programmes for Rain and Zoe Save The World so audience members need to have their phones with them ready to download.

Directed by NYC based theatre and filmmaker Hersh Ellis, with music by multi-award-winning composer Bobby Cronin, Rain and Zoe Save The World tells the story of two teenage climate activists from Washington State who embark on an impulsive motorcycle journey to join a group of oil protesters on the East Coast. On the way, Rain and Zoe discover that the true danger in this world… might just be growing up.

This play was first put on at The Mill at Sonning in early 2010 - the world has, of course, changed significantly since then, and the script has been … END_OF_DOCUMENT_TOKEN_TO_BE_REPLACED

It’s easy to see why the Orange Tree has brought this one back for another run, less than a year after its first outing here. This is a bold, … END_OF_DOCUMENT_TOKEN_TO_BE_REPLACED

I always loved Choose Your Own Adventure books. Definitely not the Steve Jackson ones where you had to roll dice (who did that?) to find out whether … END_OF_DOCUMENT_TOKEN_TO_BE_REPLACED

Well, there’s a bit about Pablo Picasso’s (1881-1973) paintings in this show that bears his name. But it’s mostly about his approach towards women. … END_OF_DOCUMENT_TOKEN_TO_BE_REPLACED