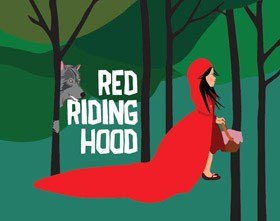 If you go down to the woods today you’re in for a big surprise – you’ll find a Lion King-esque jabbering parrot, a woodcutter and the campest wolf you have ever had the pleasure to meet.

These particular woods are found in Islington – the delightful Pleasance Theatre to be precise – where the truly exhilarating production of Red Riding Hood is thrilling young audiences.

Red Riding Hood is a pacy musical with cracking dialogue and foot-tapping songs. Willy Russell, of Blood Brothers fame, opines that a test of a good musical is whether the songs are “hummable”. Well on driving away from the theatre I found myself humming a representative medley all the way down the Seven Sisters Road.

Children’s theatre has developed remarkably over the last 10-15 years and this show provides ample evidence of that: you can’t get away with any-old-thrown-together-tat these days and here we have a kids show with adult production values. A really cool set by designer Simon Wells, beautifully lit (no credit in programme) is complemented by excellent sound quality (Chris Bogg) which is so vital to a good musical. Not only were all five voices and (disembodied) band evenly balanced but you could hear every word of the lyrics which often can’t be said of big West End shows. Credit to the sparkling cast who take it to the limit throughout the show creating the perfect recipe for kids’ entertainment at Christmas.

Matthew Jay-Ryan is quirkily cute as William the Woodcutter and his carefully measured dumb/forgetful turn provokes squeals of delight from the young audience. His big song – “Important Things” – is delivered with gusto and panache and his performance provides much energy to what is inevitably a fairly scanty plot. He is co-narrator with Grandma (Patsy Blower) and together they set the story in motion with a rattling intro that never gets bogged down in unnecessary exposition. The big Still-Alive-Despite-The-Wolf-Apparently-Eating-Her Grandma reveal is a classic smoke-and-mirrors (or wardrobe-and-bed) moment that would grace any David Blain show. Far from being old and doddery, as hinted in the script, Blower’s Grandma is definitely of the seventy-is-the-new-fifty variety – and all the more fun and energised for that.

Holly-Anna Lloyd, Mum of Little Red (as she is known), belts out her songs with Adele-like ferocity and acts as surrogate parrot-manipulator when the script doesn’t require Mother’s presence. The use of puppets as woodland creatures and the parrot adds a deft touch to the magical fairy-tale quality of the piece.

Nazarene Williams as Little Red brings an engaging humour to the role combined with a lovely voice, and natty dance routines with other members of the cast (Choreographer: Ashley Nottingham). She jumps effortlessly through the various hoops along the way from innocent cake-baker to empowered wolf-baiter and her vibrant personality keeps the audience enthralled throughout. Watch out for this girl.

And then, of course, we have the Wolf. The villain of the piece is definitely only one tent short of the full camp – but none the less delightful for that. This Wolf minces on and frankly isn’t gonna frighten the skin off a rice pudding, but Matthew Barrow milks the part for all its big teeth with a growl that is worse than his chomp, a yap that is worse than his nibble and quite honestly, when he departs the scene, it’s not with a snarl but a simper. In delivering his raison d’être with the song “Baddest of The Bad” it comes across as a kind of Michael-Jackson-meets-the-Grinch mash-up which gets the audience not so much quivering in the stalls as shaking with macho-pseud amusement. Nice one, Mr Wolf: all the better to hiss-and-boo you with.

This is a lovely script from Jake Brunger (Book and Lyrics) and Pippa Cleary (Music and Lyrics). It’s brimming with charm and humour with some great one-liners and a bit of fairy-tale name-checking – Dorothy gets in at one point – and some up-to-the-minute political satire – the Global Deforestation Crisis merits a look-in as the Paris Eco-talks are underway (this may just be an accident of timing, of course). The songs are great – whilst the odd note here or there might sound familiar (don’t they all) there is real originality in melody and harmonisation and – with the familiar half-speed kick-step finish that is a trademark of musicals – it’s all very easy on the ear. The crisp Musical Direction is by Charlie Ingles whilst Director Kate Golledge’s lightness of touch ensures that the darker themes that haunt all fairy tales are definitely subservient here to the all-encompassing art of cup-cake manufacture.

It’s fun: do take the kids and go and see it. They will be sure to learn that, actually, you don’t have to be frightened of the Wolf after all.

Follow Red as she ventures through the woods on a quest to save her family bakery. But will she be distracted by the wolf in the magical forest, where nothing is as it seems? Filled with humour and packed with original music, Red Riding Hood brings a new twist to the classic tale of bravery, love, friendship and family in a show for the whole family.

Red Riding Hood is produced by Paul Taylor-Mills, who returns to the Pleasance Theatre after last year’s production of Cat in the Hat. Other recent productions include In The Heights (King’s Cross Theatre), Bare: The Rock Musical (Union Theatre), Casa Valentina (Southwark Playhouse) and Altar Boyz (Greenwich Theatre).