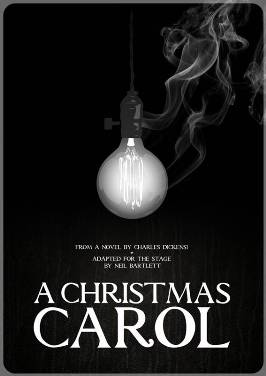 Playwright Neil Bartlett earned his OBE in 2000 for his services to the arts. His 1996 adaptation of A Christmas Carol for a small cast (“and a lightbulb”) is one of three Dickens’ novels that Bartlett has transferred to the stage.

It’s got a lot to live up to, having been adapted for a host of other mediums many, many times before. Not only that, but this quintessentially Victorian novella remains a staple of Christmas entertainment for families around the globe. Doing justice to the novel is essential.

Fortunately, this production does it justice. For theatre-goers looking to see an original production of this classic, this may well be the show for you.

The dialogue is Dickens’ own and complete with all the famous lines that made him such a terrific and timeless writer. Alexander McMorran opens the play as the miserly Scrooge, spitting out his lines as if they were bile at the festive do-gooders all the while standing on his podium and clinking together the links of his chain like the stacks of gold he so reveres. When the Portly Gentlemen approach Scrooge for a donation to their charity, he throws them out and unsympathetically exclaims, “If they’re going to die then they’d better do it, and decrease the surplus population!” Scrooge’s bitterness is frank and a little scary.

Victorian London is given a 21st century makeover, if wheelie bins and stacks of cardboard boxes bulging with rubbish qualifies. The modern street furniture that we are so familiar with strangely complements Scrooge’s old-fashioned top hat. He clearly is a man living a world away from the rest of society, preferring the company of his money and comfortable chair at a time when others come together to celebrate Christmas. The elements of old and new work together well.

The stars of the show are the ensemble. The five actors form a tightly-woven team, seamlessly transitioning between the colourful characters that come in and out of Scrooge’s troubled past, present and future. The three ghosts that come to haunt him each breathe a new sense of perspective into Scrooge. Along with the ghosts, Scrooge is also haunted by his earlier dialogue by deft use of a tape recorder. His interview with the Portly Gentlemen is played back to him when he sees Tiny Tim, barely clinging onto life, in his underpaid clerk’s home as they celebrate Christmas. One is reminded of how many public figures have had their reputations ruined by their careless utterances.

The change in Scrooge at the end is heartwarming without being too saccharine. Sprinklings of humour keep this light moral tale festive and enjoyable.

With clever use of traditional Christmas carols, atmospheric lighting and fantastic direction by Gus Miller, A Christmas Carol promises to be a good choice this winter. No matter how many versions you have seen, read or heard before, it never gets old and will continue to inspire for many Christmases yet to come.

The Old Red Lion Theatre is a little fringe venue situated above a (sound-proofed) pub in Islington. It has a well-deserved reputation for putting on high-quality shows in a confined space. It’s an intimate venue which makes it all the more welcoming. With a wonderfully warm interior, it makes a cosy refuge to the cold streets of London at this time of year.

A Christmas Carol
Using only Charles Dickens’ extraordinary words and an ensemble of six actors, Neil Bartlett’s A Christmas Carol is a bold theatrical reimagining of the classic Christmas story. Through this amazing re-working Barlett pulls to the forefront qualities of love, compassion and forgiveness in a totally new slant on Dickens.

Ebenezer Scrooge is a man who has everything; a thriving business, a house of his own in a popular part of London and a huge stash of money he wants to keep for himself. Best of all, it’s Christmas Eve and he’s about to be visited by his old friend Jacob Marley. The only problem is that Marley is dead. Dead as a door-nail. Scrooge is about to be dragged on a ride through the snowy and uncertain landscapes of Christmas past, present and yet to come. What is to be seen cannot be forgotten.

You will be haunted by three spirits. Expect the first tomorrow when the bell… tolls… God bless us, every… One.

Dickens’ quintessential story of ghosts, greed and goodwill is given boisterous new life in this chilling, contemporary, fresh production. Here, the ensemble play all the roles – singing, creating sound effects and new stage configurations through their invigorating physicality.

I have seen some outstanding acting recently at the intimate Finborough Theatre, and this new play is no exception. The highly talented cast quickly … END_OF_DOCUMENT_TOKEN_TO_BE_REPLACED

In the pandemic (remember that?) I worked in adult social care. My role was to help older people in their own homes with daily tasks - I’d cook meals, … END_OF_DOCUMENT_TOKEN_TO_BE_REPLACED

The world-famous Wilton’s Music Hall and the children’s classic The Wind in the Willows make perfect bedfellows. Piers Torday has written a version … END_OF_DOCUMENT_TOKEN_TO_BE_REPLACED

Some journalists get, as it were, a bad press, though some of them don’t help themselves with some of the things they write and do. This play doesn’t, … END_OF_DOCUMENT_TOKEN_TO_BE_REPLACED

Paul (Lewis Bruniges) and Freddie Metz (Oliver Yellop), who identify as cousins, are so desperate to get out of the German Democratic Republic, … END_OF_DOCUMENT_TOKEN_TO_BE_REPLACED