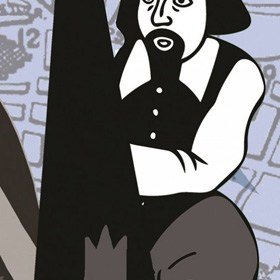 The premise of A Kingdom For A Stage is exciting and full of potential. Shakespeare, currently hanging out with his writer chums in the afterlife, is given the chance to pop back down to earth; he’ll have a look around the rebuilt Globe theatre, check out his 400th anniversary celebrations and see what he thinks of modern life in general. A lovely opportunity for some parody, to compare and contrast human foibles in Shakespeare’s time with those of today and to find out if the bard has any wisdom which could help us with our contemporary problems.

Don’t get me wrong – we do get all of the above. The problem with this play, however, is that it is suffering from an identity crisis. Is A Kingdom For A Stage a wry look at what Shakespeare would think of today’s society? Yes. Is it a Shakespearean parody of the modern financial markets? Yes, that too. Is it a historical soap opera about Shakespeare’s life? Um…yes. Yes it is. Author Tony Diggle, undeniably a clever writer, has so much to say and so many ways in which he wants to say it that he has ended up apparently trying to mash three plays into one, with dubious success.

The scenes in the afterlife, with Shakespeare, Kit Marlowe, Ben Johnson and George Bernard Shaw all conspiring to outwit their thuggish angelic security guard, are probably the most enjoyable. Strong performances from all of the eminent authors combined with a healthy dose of literary humour makes them a delight to watch. The idea of a “Play-Battle” between the argumentative Marlowe and stubborn Will is inspired, and the result is a fun, frenetic little pastiche. However, Shakespeare’s visit to earth is surprisingly brief, rattling through at breakneck speed. This is in stark contrast to the scenes from his life which, although interesting, are rather ponderous and stretched out almost to breaking point.

The staging is also a little wobbly; many entrances were marred by the fact that we had clearly seen the actor hovering in the wings beforehand. Puck’s dramatic apparition from the wardrobe would have been more effective had we not all watched her struggle for two minutes to sneak into the back of it beforehand.

Despite all this, there is something very endearing about A Kingdom For A Stage. This is partly due to the almost uniformly excellent standard of acting – Jonathan Coote as Will is particularly engaging, perfectly balancing the pathos and humour essential to the role – but there is also a very warm, human feel to the whole production. It is neither too high-brow nor too “whacky”, it exposes human weakness without being sententious and every line throbs with deep love and respect for the language of Shakespeare. Uneven and patchy it may be, but it is certainly a heartfelt tribute to the bard. I think the man himself would have rather enjoyed it.

William Shakespeare sits in the heavens with his peers excited by the recreation of his Globe theatre in London and by the four hundredth anniversary of his death. With Puck’s assistance he returns to London believing that everything is very much better. But has anything really changed? And what does this mean for the future?

People are like swans. Hopefully, that’s got your attention and while you may be questioning my statement, it is true.  We all have a surface that we … END_OF_DOCUMENT_TOKEN_TO_BE_REPLACED

In case anyone in the audience didn’t know what a toilet looks like, a neon sign reading ‘Toilets’ hangs in between, well, two toilets. There probably … END_OF_DOCUMENT_TOKEN_TO_BE_REPLACED

Dolly Parton’s musical 9 to 5 sets out to do one thing: ENTERTAIN, and it does this superbly. The show has just started an extended tour at Wimbledon … END_OF_DOCUMENT_TOKEN_TO_BE_REPLACED

I feel so comfortable here in this large airy Church, seating is socially distanced and face mask compliance is at a level that some large West End … END_OF_DOCUMENT_TOKEN_TO_BE_REPLACED