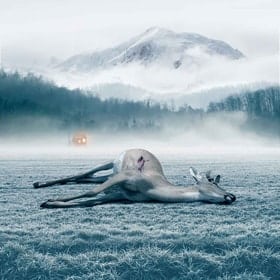 The human mind is a powerful thing, but at times, it’s also a dirty liar! Childbirth, heartbreak; the greatest pains of our lives never really stay as fresh in our minds as they should because the brain is ultimately wired to protect its host and to forget that which might be harmful. This ‘lie of the mind’ is even more detrimental when it comes to domestic violence, just one of the themes that Sam Sheppard explores in his aptly titled play A Lie of the Mind.

Following a particularly violent episode of domestic abuse, Beth awakens in hospital with her brother Mike. Her Husband Jake believes that he has killed her and crumbles at the feet of his brother Frankie and from here the two families are thrown into disarray. Directed by James Hillier for Defibrillator Theatre, the production is an assaulting yet intriguing window into family life, mental health and domestic abuse. Harrowing and disturbing in some moments, yet humorous and absurd in others, it’s certainly a shock to the system that leaves you pondering for many hours afterwards!

At its heart, this is a character driven piece. Sheppard has said that while writing the piece it became clear to him that there was little time spent discovering a voice as each of the characters were quite clear in informing you where they were headed. As such, it’s no surprise that the success of this production is a direct result of the superb cast, but more on that later.

Setting the scene, and essential to the atmosphere of the piece is musician James Marples, who interjects at pivotal moments of the production. The set is minimalist with a stylised crescent moon used to show the passage of time. One thing to consider with the days warming up is to ensure you don’t dress in anything that doesn’t breathe! This venue is incredibly hot and steamy and I really felt for the actors who appeared to be melting at times!

As mentioned above, the cast are superb. As the emotionally unstable Jake, Gethin Anthony is far too aggressive to be likable, but certainly pathetic enough to be worthy of our pity. His intensity is consistent as he fluctuates between an almost calm resignation and moments of downright panic and despair. In direct contrast, as the badly injured Beth, Alexandra Dowling is instantly relatable.

Despite her injured brain, Beth speaks the truth far more elegantly than most. When in her childlike state her simplified view of the world is endearing, however as her sincerity turns to a suborn self-assuredness we begin to question who exactly Beth was before the injury. This is compounded by the work of Nancy Crane as Beth’s Mother Meg who seems follows a similar path, beginning in a place of sincerity and perspective, yet drifting towards a lie as the narrative progresses.

Bound by family duty, Jakes brother Frankie is portrayed by Michael Fox and works in synchrony with Beth’s brother Mike, Robert Lonsdale, as the voice of reason. Both driven by family loyalties and fiercely protective of their siblings, the two appear to be the only members of the cast who remain on-track for the full duration of the piece. Fox’s Frankie is positioned as the most rational of the characters and despite his ‘disabled’ state for a large part of the production, manages to keep the energy on stage grounded. The sense of realism within his performance is one of the key components that makes this production accessible for audiences amidst the hysteria.

Robert Lonsdale provided for me the standout performance. At times, it felt that the energy of the production was getting away from the actors, particularly during moments of excessive shouting.

Lonsdale balanced out these moments, raising the energy when needed but also demonstrating a greater sense of center and reservation. The level of truth he brings to the stage in both his anger and his unwavering family loyalty is exceptional and works to humanise the scenario at play.

Harrowing and thought-provoking, A Lie of the Mind is a production that you have to work for rather than passively absorb. With exceptional onstage performers who have been provided with a clear artistic vision, the production is certainly worth braving the steamy Southwark Playhouse for!

Defibrillator in association with
Eilene Davidson presents
A Lie of the Mind
by Sam Shepard
4 – 27 MAY 2017
http://southwarkplayhouse.co.uk/

It is the duty of every citizen to answer the call to support and protect the United Kingdom and its allies so last night, while the rest of the … END_OF_DOCUMENT_TOKEN_TO_BE_REPLACED

Harold Pinter only ever wrote one novel. And, let's be honest, he didn’t rush into this literary endeavour. He started it in 1950 and the book was … END_OF_DOCUMENT_TOKEN_TO_BE_REPLACED

How far would you go for the people you love? What lies would you tell? What sacrifices would you make? That’s the question at the heart of The … END_OF_DOCUMENT_TOKEN_TO_BE_REPLACED

“All political lives, unless they are cut off in midstream at a happy juncture, end in failure, because that is the nature of politics and of human … END_OF_DOCUMENT_TOKEN_TO_BE_REPLACED