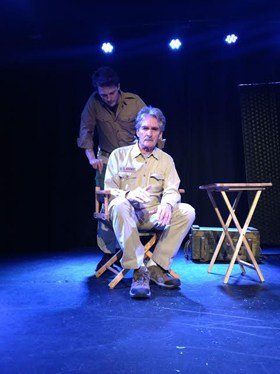 In one sense, there’s not much I can say about Area 52. So much of it is “classified”, as Theodore (JB Newman) finds out when asking even the most basic of questions of Milo (David Patrick Stucky), but there are, as the play slowly but surely reveals, some serious mind games going on, and there was, at least in my own mind, a number of theories as to what exactly is happening – and, more importantly, for what purpose? After all, thoughts can’t be “classified” (for which read ‘inaccessible’ rather than ‘arranged’ or ‘categorised’). What I can say is this: these two men are in a room, in US Army uniform, and the door is locked from the outside. There is no key. There are no communication devices. It’s not like Theodore can whip out his iPhone and use Google Maps to establish his current position.

My initial thought, then, seeing as Theodore mentioned the word ‘hell’, was whether this was a version of it. Jean-Paul Sartre’s famous adage, “L’enfer, c’est les autres” (hell is other people) is depicted in his play Huis Clos, translated either as ‘No Exit’ or ‘No Way Out’. There’s a strong sense almost from the very start that Milo has a traditionalist military mindset, behaving machine-like, following orders irrespective of what they are, sharing none of Theodore’s intrigue and interest. Polar opposites, perhaps put together to spend eternity with one another.

Of course, the play isn’t set in the afterlife, as it turns out: I would not disclose the true narrative so freely. But it’s an example of one of several points in the course of the play where the audience is kept thinking about the real story behind the relatively mundane events. At surface level, all we have are two people standing guard over something they know nothing about, and do not need to know, like members of the Armed Forces who are called upon to guard members of the Royal Family or senior politicians: the nature of the meeting or ceremony is irrelevant for these guards – they are simply doing their duty.

The set is kept simple – the show’s power is really in its dialogue and how it is brought to life with confidence and eloquence by both actors. Of worthy note is a chess board. The chess match between the two characters is used repeatedly, as it progresses, for dramatic purposes and to draw allusions and metaphors from. Some may say it is used in this way too often, but in the context of the play and its claustrophobic atmosphere, it is a useful constant when so much else is very uncertain. The dialogue has a level of detail that occasionally borders on the ridiculous, but it is in an enthralling final scene that the reasons for this become all too apparent.

The said final scene is interesting but bizarre, requiring a substantial suspension of disbelief to fully appreciate, but only if one assumes the ‘truth’ as it finally pours forth, rapidly, to be actually true: with so many twists and turns and statements from both characters assumed by the other to be lies, and cross-examination level scrutiny making almost everything even more ambiguous, who knows?

The ending itself, when it came, was a rarity for me, insofar that I was genuinely momentarily affrighted. That’s a highlight in itself (a first for me at the theatre, I think, for at least a decade, if not two), and a testament to how absorbing this production is. A very focused and unrelentingly intense play, this is a great and gritty piece of theatre. That much I can say with clarity.

Area 51 is the US Military site in the Nevada Desert where alien life was ‘discovered.’ Next to it is a hangar containing two US Army Soldiers: a Corporal and a Captain. Neither knows whom or what they are guarding.

This Waiting for Godot meets The Twilight Zone, Science Fiction play is a tense drama of suspicion, bluff and double bluff, leading to a nerve-shredding conclusion.

Starring David Patrick Stucky as Milo and JB Newman as Theodore. Written and directed by Marc Blake, author of ITV Drama ‘The Swap’, this is his first stage play.

Details of how to book tickets:
https://www.tristanbatestheatre.co.uk/